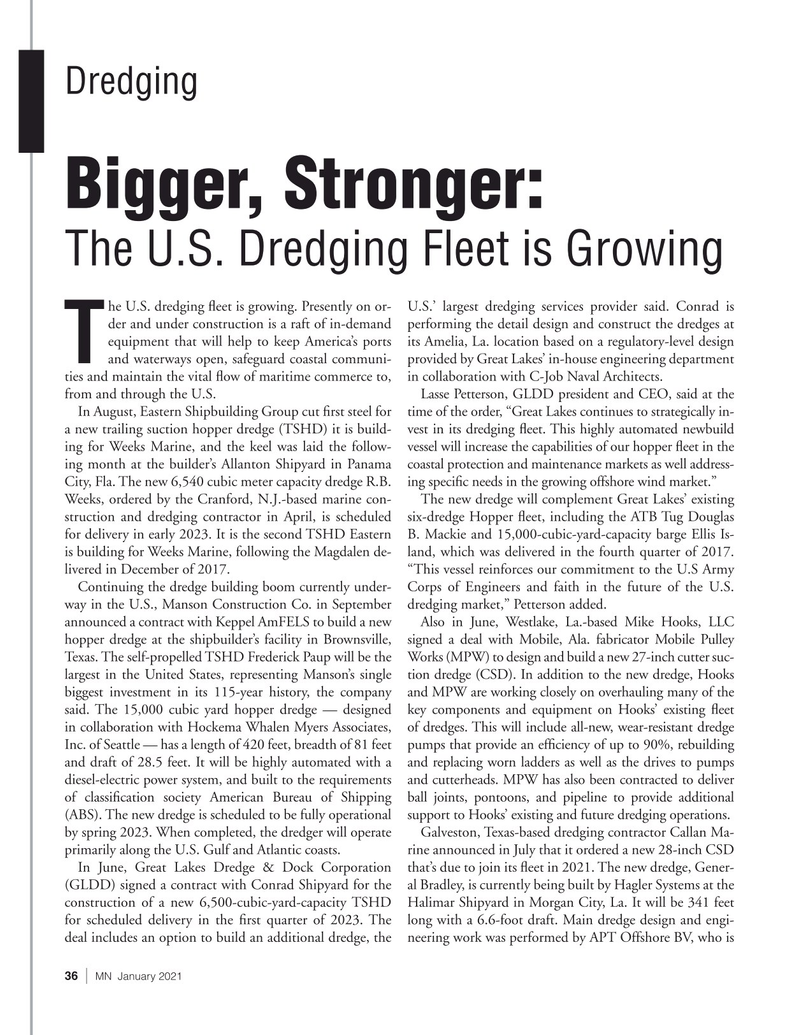 The U.S. Dredging Fleet is Growing he U.S. dredging ? eet is growing. Presently on or- U.S.’ largest dredging services provider said. Conrad is der and under construction is a raft of in-demand performing the detail design and construct the dredges at equipment that will help to keep America’s ports its Amelia, La. location based on a regulatory-level design

from and through the U.S. Lasse Petterson, GLDD president and CEO, said at the

In August, Eastern Shipbuilding Group cut ? rst steel for time of the order, “Great Lakes continues to strategically in- a new trailing suction hopper dredge (TSHD) it is build- vest in its dredging ? eet. This highly automated newbuild ing for Weeks Marine, and the keel was laid the follow- vessel will increase the capabilities of our hopper ? eet in the ing month at the builder’s Allanton Shipyard in Panama coastal protection and maintenance markets as well address-

Weeks, ordered by the Cranford, N.J.-based marine con- The new dredge will complement Great Lakes’ existing struction and dredging contractor in April, is scheduled six-dredge Hopper ? eet, including the ATB Tug Douglas for delivery in early 2023. It is the second TSHD Eastern B. Mackie and 15,000-cubic-yard-capacity barge Ellis Is- is building for Weeks Marine, following the Magdalen de- land, which was delivered in the fourth quarter of 2017. livered in December of 2017. “This vessel reinforces our commitment to the U.S Army

Continuing the dredge building boom currently under- Corps of Engineers and faith in the future of the U.S. way in the U.S., Manson Construction Co. in September dredging market,” Petterson added.

announced a contract with Keppel AmFELS to build a new Also in June, Westlake, La.-based Mike Hooks, LLC hopper dredge at the shipbuilder’s facility in Brownsville, signed a deal with Mobile, Ala. fabricator Mobile Pulley

Texas. The self-propelled TSHD Frederick Paup will be the Works (MPW) to design and build a new 27-inch cutter suc- largest in the United States, representing Manson’s single tion dredge (CSD). In addition to the new dredge, Hooks biggest investment in its 115-year history, the company and MPW are working closely on overhauling many of the said. The 15,000 cubic yard hopper dredge — designed key components and equipment on Hooks’ existing ? eet in collaboration with Hockema Whalen Myers Associates, of dredges. This will include all-new, wear-resistant dredge

Inc. of Seattle — has a length of 420 feet, breadth of 81 feet pumps that provide an ef? ciency of up to 90%, rebuilding and draft of 28.5 feet. It will be highly automated with a and replacing worn ladders as well as the drives to pumps diesel-electric power system, and built to the requirements and cutterheads. MPW has also been contracted to deliver of classi? cation society American Bureau of Shipping ball joints, pontoons, and pipeline to provide additional (ABS). The new dredge is scheduled to be fully operational support to Hooks’ existing and future dredging operations.

by spring 2023. When completed, the dredger will operate Galveston, Texas-based dredging contractor Callan Ma- primarily along the U.S. Gulf and Atlantic coasts. rine announced in July that it ordered a new 28-inch CSD

In June, Great Lakes Dredge & Dock Corporation that’s due to join its ? eet in 2021. The new dredge, Gener- (GLDD) signed a contract with Conrad Shipyard for the al Bradley, is currently being built by Hagler Systems at the construction of a new 6,500-cubic-yard-capacity TSHD Halimar Shipyard in Morgan City, La. It will be 341 feet for scheduled delivery in the ? rst quarter of 2023. The long with a 6.6-foot draft. Main dredge design and engi- deal includes an option to build an additional dredge, the neering work was performed by APT Offshore BV, who is 36 | MN January 2021