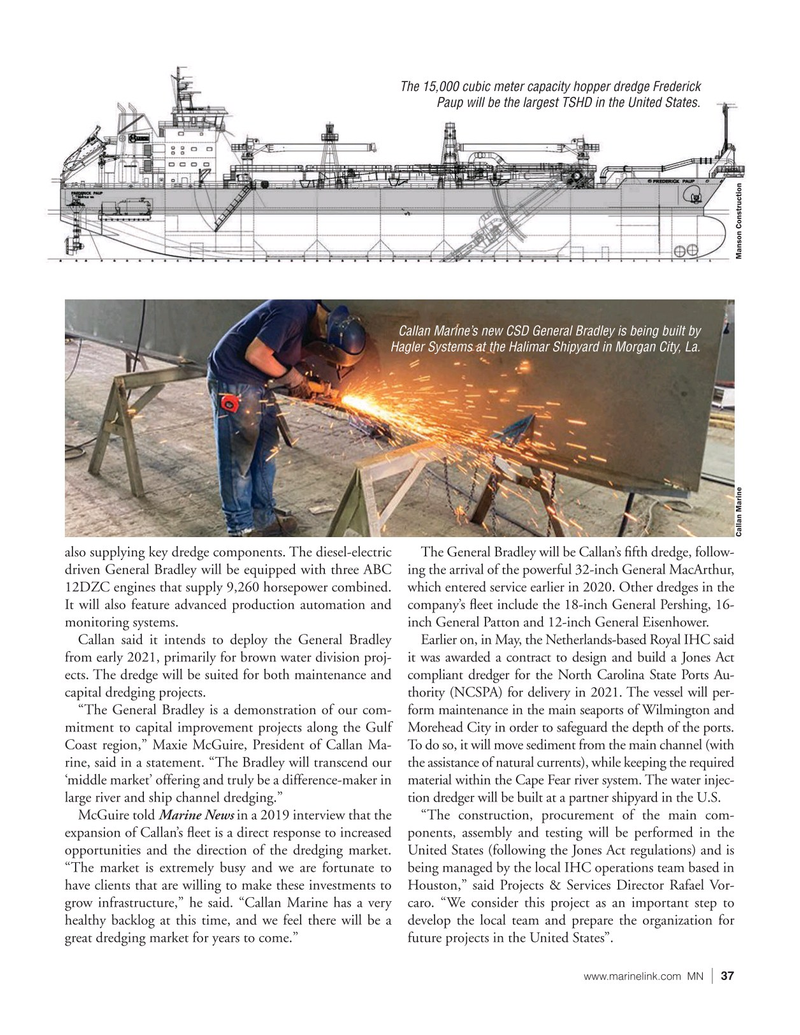 Paup will be the largest TSHD in the United States.

Callan Marine’s new CSD General Bradley is being built by

Hagler Systems at the Halimar Shipyard in Morgan City, La.

Callan Marine Manson Construction also supplying key dredge components. The diesel-electric The General Bradley will be Callan’s ? fth dredge, follow- driven General Bradley will be equipped with three ABC ing the arrival of the powerful 32-inch General MacArthur, 12DZC engines that supply 9,260 horsepower combined. which entered service earlier in 2020. Other dredges in the

Callan said it intends to deploy the General Bradley Earlier on, in May, the Netherlands-based Royal IHC said from early 2021, primarily for brown water division proj- it was awarded a contract to design and build a Jones Act ects. The dredge will be suited for both maintenance and compliant dredger for the North Carolina State Ports Au- capital dredging projects. thority (NCSPA) for delivery in 2021. The vessel will per- “The General Bradley is a demonstration of our com- form maintenance in the main seaports of Wilmington and mitment to capital improvement projects along the Gulf Morehead City in order to safeguard the depth of the ports.

Coast region,” Maxie McGuire, President of Callan Ma- To do so, it will move sediment from the main channel (with rine, said in a statement. “The Bradley will transcend our the assistance of natural currents), while keeping the required ‘middle market’ offering and truly be a difference-maker in material within the Cape Fear river system. The water injec- large river and ship channel dredging.” tion dredger will be built at a partner shipyard in the U.S.

McGuire told Marine News in a 2019 interview that the “The construction, procurement of the main com- expansion of Callan’s ? eet is a direct response to increased ponents, assembly and testing will be performed in the opportunities and the direction of the dredging market. United States (following the Jones Act regulations) and is “The market is extremely busy and we are fortunate to being managed by the local IHC operations team based in have clients that are willing to make these investments to Houston,” said Projects & Services Director Rafael Vor- grow infrastructure,” he said. “Callan Marine has a very caro. “We consider this project as an important step to healthy backlog at this time, and we feel there will be a develop the local team and prepare the organization for great dredging market for years to come.” future projects in the United States”.