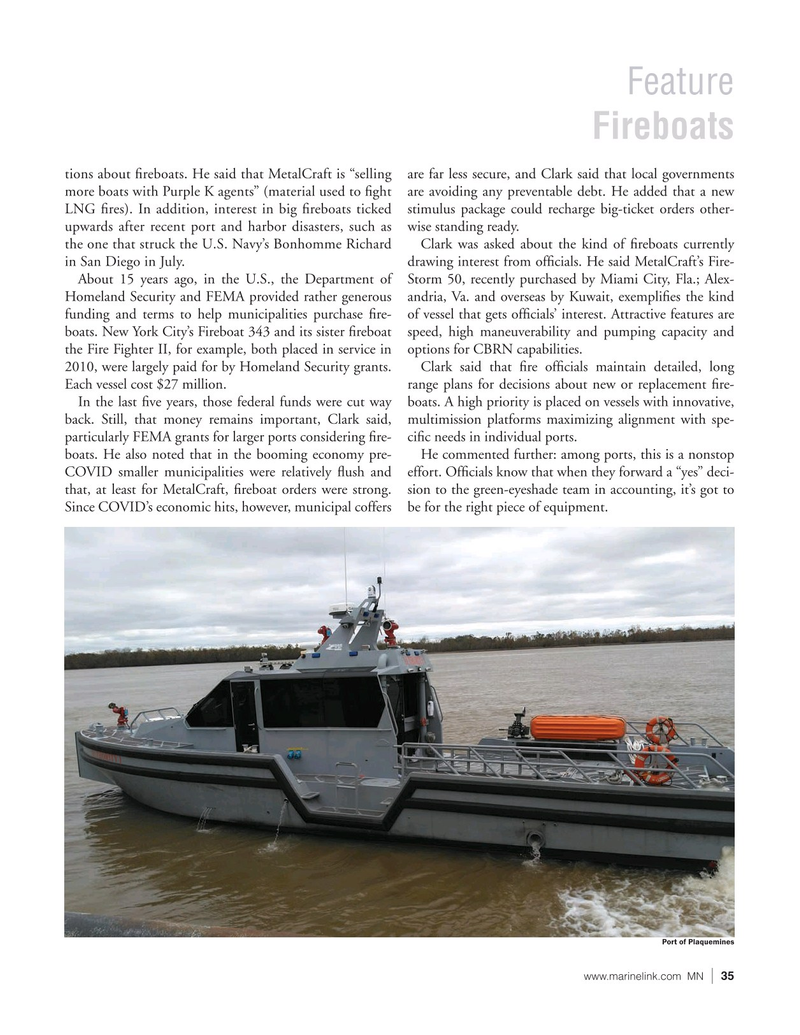 Fireboats tions about ? reboats. He said that MetalCraft is “selling are far less secure, and Clark said that local governments more boats with Purple K agents” (material used to ? ght are avoiding any preventable debt. He added that a new

the one that struck the U.S. Navy’s Bonhomme Richard Clark was asked about the kind of ? reboats currently in San Diego in July. drawing interest from of? cials. He said MetalCraft’s Fire-

About 15 years ago, in the U.S., the Department of Storm 50, recently purchased by Miami City, Fla.; Alex-

Homeland Security and FEMA provided rather generous andria, Va. and overseas by Kuwait, exempli? es the kind funding and terms to help municipalities purchase ? re- of vessel that gets of? cials’ interest. Attractive features are boats. New York City’s Fireboat 343 and its sister ? reboat speed, high maneuverability and pumping capacity and the Fire Fighter II, for example, both placed in service in options for CBRN capabilities.

2010, were largely paid for by Homeland Security grants. Clark said that ? re of? cials maintain detailed, long

Each vessel cost $27 million. range plans for decisions about new or replacement ? re-

boats. He also noted that in the booming economy pre- He commented further: among ports, this is a nonstop

COVID smaller municipalities were relatively ? ush and effort. Of? cials know that when they forward a “yes” deci- that, at least for MetalCraft, ? reboat orders were strong. sion to the green-eyeshade team in accounting, it’s got to

Since COVID’s economic hits, however, municipal coffers be for the right piece of equipment.