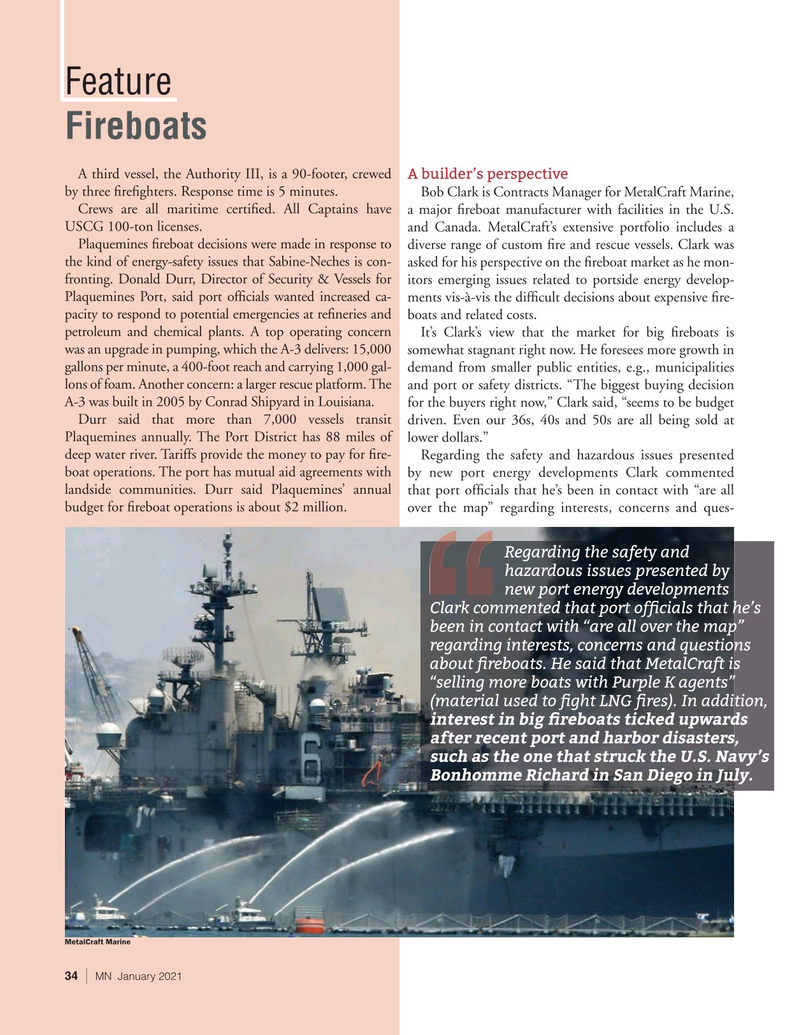 A third vessel, the Authority III, is a 90-footer, crewed A builder’s perspective by three ? re? ghters. Response time is 5 minutes. Bob Clark is Contracts Manager for MetalCraft Marine,

Crews are all maritime certi? ed. All Captains have a major ? reboat manufacturer with facilities in the U.S.

Plaquemines ? reboat decisions were made in response to diverse range of custom ? re and rescue vessels. Clark was the kind of energy-safety issues that Sabine-Neches is con- asked for his perspective on the ? reboat market as he mon- fronting. Donald Durr, Director of Security & Vessels for itors emerging issues related to portside energy develop-

Plaquemines Port, said port of? cials wanted increased ca- ments vis-à-vis the dif? cult decisions about expensive ? re- pacity to respond to potential emergencies at re? neries and boats and related costs.

petroleum and chemical plants. A top operating concern It’s Clark’s view that the market for big ? reboats is was an upgrade in pumping, which the A-3 delivers: 15,000 somewhat stagnant right now. He foresees more growth in gallons per minute, a 400-foot reach and carrying 1,000 gal- demand from smaller public entities, e.g., municipalities lons of foam. Another concern: a larger rescue platform. The and port or safety districts. “The biggest buying decision

A-3 was built in 2005 by Conrad Shipyard in Louisiana. for the buyers right now,” Clark said, “seems to be budget

Plaquemines annually. The Port District has 88 miles of lower dollars.” deep water river. Tariffs provide the money to pay for ? re- Regarding the safety and hazardous issues presented boat operations. The port has mutual aid agreements with by new port energy developments Clark commented landside communities. Durr said Plaquemines’ annual that port of? cials that he’s been in contact with “are all budget for ? reboat operations is about $2 million. over the map” regarding interests, concerns and ques-

Clark commented that port of? cials that he’s been in contact with “are all over the map” regarding interests, concerns and questions about ? reboats. He said that MetalCraft is “selling more boats with Purple K agents” (material used to ? ght LNG ? res). In addition, interest in big ? reboats ticked upwards after recent port and harbor disasters, such as the one that struck the U.S. Navy’s