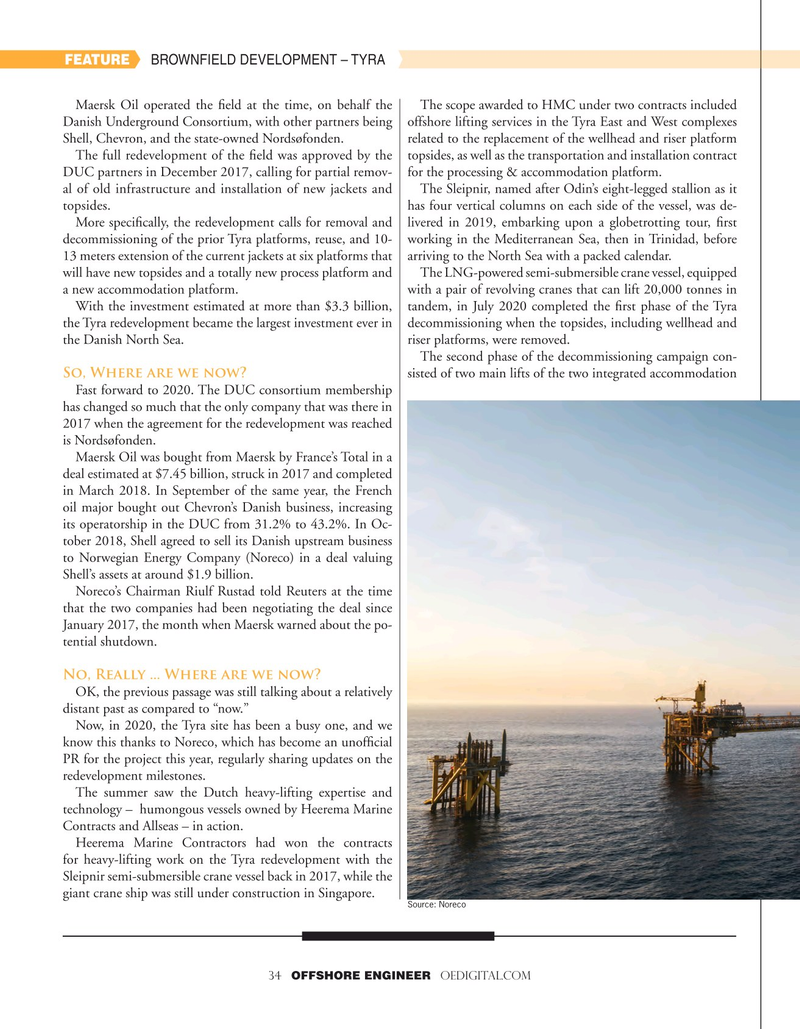 Maersk Oil operated the feld at the time, on behalf the The scope awarded to HMC under two contracts included

Danish Underground Consortium, with other partners being offshore lifting services in the Tyra East and West complexes

Shell, Chevron, and the state-owned Nordsøfonden. related to the replacement of the wellhead and riser platform

The full redevelopment of the feld was approved by the topsides, as well as the transportation and installation contract

DUC partners in December 2017, calling for partial remov- for the processing & accommodation platform.

al of old infrastructure and installation of new jackets and The Sleipnir, named after Odin’s eight-legged stallion as it topsides. has four vertical columns on each side of the vessel, was de-

More specifcally, the redevelopment calls for removal and livered in 2019, embarking upon a globetrotting tour, frst decommissioning of the prior Tyra platforms, reuse, and 10- working in the Mediterranean Sea, then in Trinidad, before 13 meters extension of the current jackets at six platforms that arriving to the North Sea with a packed calendar.

will have new topsides and a totally new process platform and The LNG-powered semi-submersible crane vessel, equipped a new accommodation platform. with a pair of revolving cranes that can lift 20,000 tonnes in

With the investment estimated at more than $3.3 billion, tandem, in July 2020 completed the frst phase of the Tyra the Tyra redevelopment became the largest investment ever in decommissioning when the topsides, including wellhead and the Danish North Sea. riser platforms, were removed.

The second phase of the decommissioning campaign con-

So, Where are we now? sisted of two main lifts of the two integrated accommodation

Fast forward to 2020. The DUC consortium membership has changed so much that the only company that was there in 2017 when the agreement for the redevelopment was reached is Nordsøfonden.

Maersk Oil was bought from Maersk by France’s Total in a deal estimated at $7.45 billion, struck in 2017 and completed in March 2018. In September of the same year, the French oil major bought out Chevron’s Danish business, increasing its operatorship in the DUC from 31.2% to 43.2%. In Oc- tober 2018, Shell agreed to sell its Danish upstream business to Norwegian Energy Company (Noreco) in a deal valuing

Shell’s assets at around $1.9 billion.

January 2017, the month when Maersk warned about the po- tential shutdown.

OK, the previous passage was still talking about a relatively distant past as compared to “now.”

Now, in 2020, the Tyra site has been a busy one, and we know this thanks to Noreco, which has become an unoffcial

PR for the project this year, regularly sharing updates on the redevelopment milestones.

Contracts and Allseas – in action.

Sleipnir semi-submersible crane vessel back in 2017, while the giant crane ship was still under construction in Singapore.