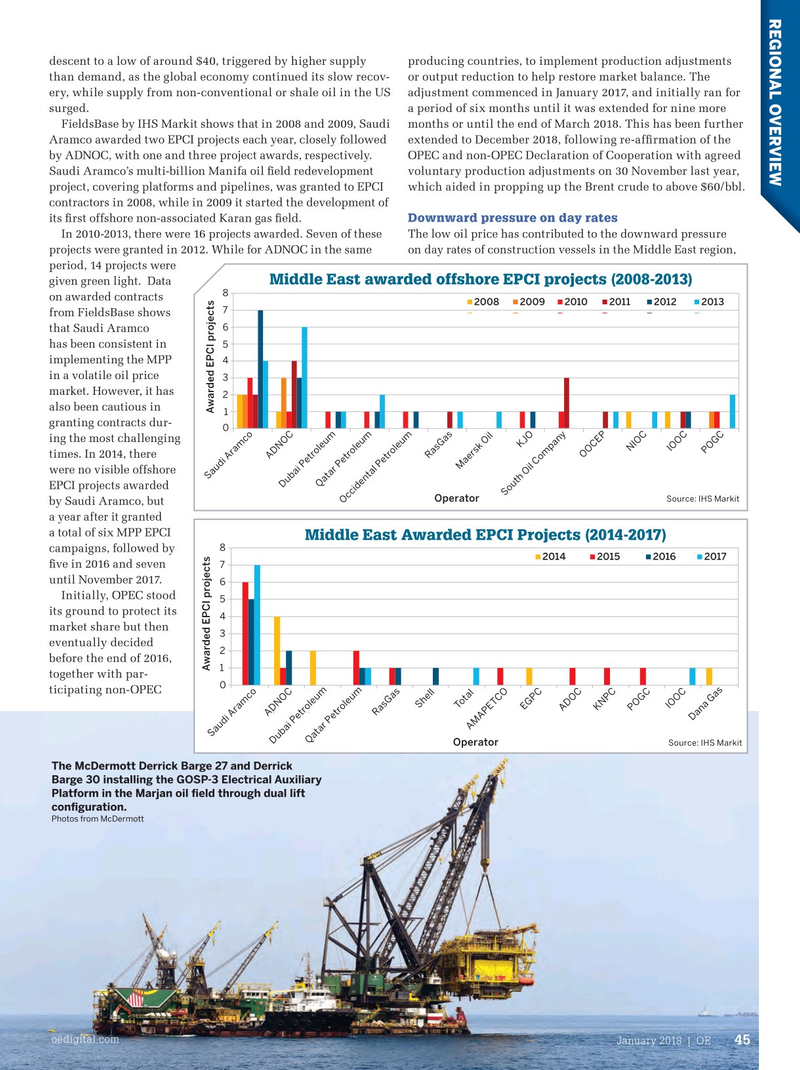 REGIONAL OVERVIEW descent to a low of around $40, triggered by higher supply producing countries, to implement production adjustments than demand, as the global economy continued its slow recov- or output reduction to help restore market balance. The ery, while supply from non-conventional or shale oil in the US adjustment commenced in January 2017, and initially ran for surged. a period of six months until it was extended for nine more

FieldsBase by IHS Markit shows that in 2008 and 2009, Saudi months or until the end of March 2018. This has been further

Aramco awarded two EPCI projects each year, closely followed extended to December 2018, following re-af? rmation of the by ADNOC, with one and three project awards, respectively. OPEC and non-OPEC Declaration of Cooperation with agreed

Saudi Aramco’s multi-billion Manifa oil ? eld redevelopment voluntary production adjustments on 30 November last year, project, covering platforms and pipelines, was granted to EPCI which aided in propping up the Brent crude to above $60/bbl. contractors in 2008, while in 2009 it started the development of

In 2010-2013, there were 16 projects awarded. Seven of these The low oil price has contributed to the downward pressure projects were granted in 2012. While for ADNOC in the same on day rates of construction vessels in the Middle East region, period, 14 projects were

Maersk Oil were no visible offshore

Occidental Petroleum by Saudi Aramco, but a year after it granted a total of six MPP EPCI

Initially, OPEC stood 5 its ground to protect its 4 market share but then 3 eventually decided 2 before the end of 2016,

The McDermott Derrick Barge 27 and Derrick