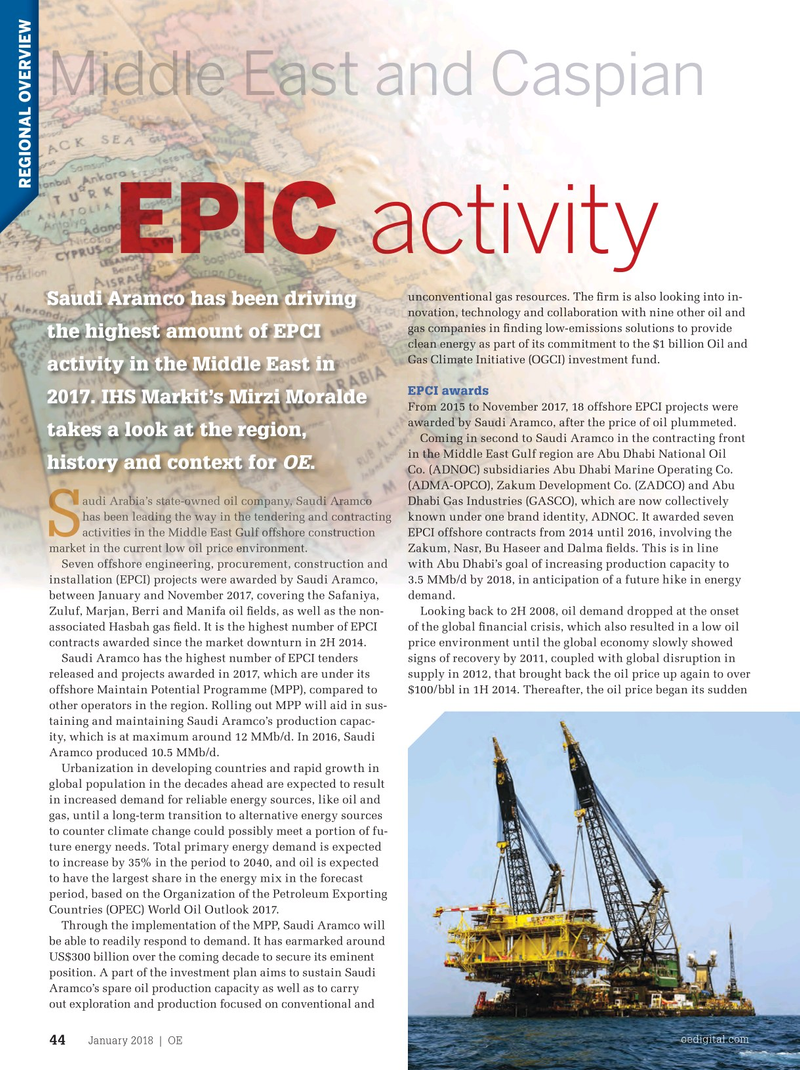 EPIC activity unconventional gas resources. The ? rm is also looking into in-

Saudi Aramco has been driving novation, technology and collaboration with nine other oil and gas companies in ? nding low-emissions solutions to provide the highest amount of EPCI clean energy as part of its commitment to the $1 billion Oil and

activity in the Middle East in

From 2015 to November 2017, 18 offshore EPCI projects were awarded by Saudi Aramco, after the price of oil plummeted. takes a look at the region,

Coming in second to Saudi Aramco in the contracting front in the Middle East Gulf region are Abu Dhabi National Oil history and context for OE.

Zuluf, Marjan, Berri and Manifa oil ? elds, as well as the non- Looking back to 2H 2008, oil demand dropped at the onset associated Hasbah gas ? eld. It is the highest number of EPCI of the global ? nancial crisis, which also resulted in a low oil contracts awarded since the market downturn in 2H 2014. price environment until the global economy slowly showed

Saudi Aramco has the highest number of EPCI tenders signs of recovery by 2011, coupled with global disruption in released and projects awarded in 2017, which are under its supply in 2012, that brought back the oil price up again to over offshore Maintain Potential Programme (MPP), compared to $100/bbl in 1H 2014. Thereafter, the oil price began its sudden other operators in the region. Rolling out MPP will aid in sus- taining and maintaining Saudi Aramco’s production capac- ity, which is at maximum around 12 MMb/d. In 2016, Saudi

Urbanization in developing countries and rapid growth in global population in the decades ahead are expected to result in increased demand for reliable energy sources, like oil and gas, until a long-term transition to alternative energy sources to counter climate change could possibly meet a portion of fu- ture energy needs. Total primary energy demand is expected to increase by 35% in the period to 2040, and oil is expected to have the largest share in the energy mix in the forecast period, based on the Organization of the Petroleum Exporting

Through the implementation of the MPP, Saudi Aramco will be able to readily respond to demand. It has earmarked around

US$300 billion over the coming decade to secure its eminent position. A part of the investment plan aims to sustain Saudi

Aramco’s spare oil production capacity as well as to carry out exploration and production focused on conventional and oedigital.com