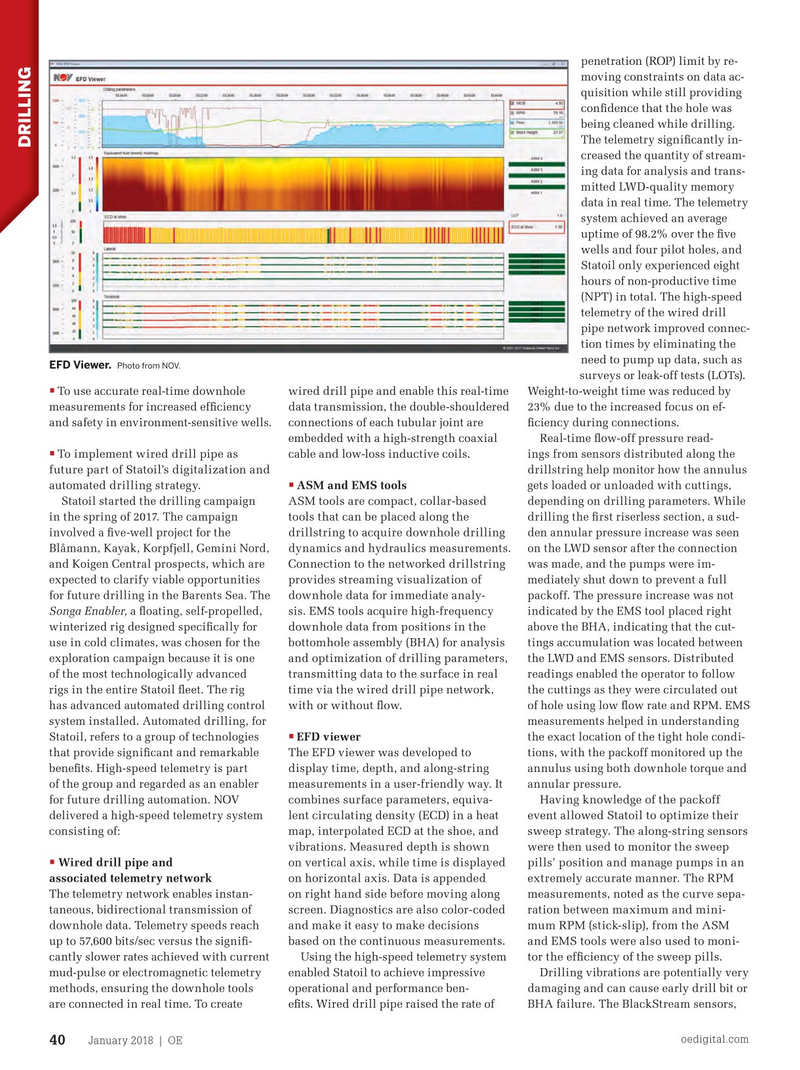 penetration (ROP) limit by re- moving constraints on data ac- quisition while still providing con? dence that the hole was being cleaned while drilling.

The telemetry signi? cantly in-

DRILLING creased the quantity of stream- ing data for analysis and trans- mitted LWD-quality memory data in real time. The telemetry system achieved an average uptime of 98.2% over the ? ve wells and four pilot holes, and

Statoil only experienced eight hours of non-productive time (NPT) in total. The high-speed telemetry of the wired drill pipe network improved connec- tion times by eliminating the need to pump up data, such as

surveys or leak-off tests (LOTs). • To use accurate real-time downhole wired drill pipe and enable this real-time Weight-to-weight time was reduced by measurements for increased ef? ciency data transmission, the double-shouldered 23% due to the increased focus on ef- and safety in environment-sensitive wells.

connections of each tubular joint are ? ciency during connections.

Real-time ? ow-off pressure read- embedded with a high-strength coaxial • To implement wired drill pipe as ings from sensors distributed along the cable and low-loss inductive coils.

future part of Statoil’s digitalization and drillstring help monitor how the annulus • automated drilling strategy. ASM and EMS tools gets loaded or unloaded with cuttings,

Statoil started the drilling campaign depending on drilling parameters. While

ASM tools are compact, collar-based in the spring of 2017. The campaign drilling the ? rst riserless section, a sud- tools that can be placed along the involved a ? ve-well project for the den annular pressure increase was seen drillstring to acquire downhole drilling

Blåmann, Kayak, Korpfjell, Gemini Nord, on the LWD sensor after the connection dynamics and hydraulics measurements. and Koigen Central prospects, which are was made, and the pumps were im-

Connection to the networked drillstring expected to clarify viable opportunities mediately shut down to prevent a full provides streaming visualization of for future drilling in the Barents Sea. The packoff. The pressure increase was not downhole data for immediate analy-

Songa Enabler, a ? oating, self-propelled, indicated by the EMS tool placed right sis. EMS tools acquire high-frequency winterized rig designed speci? cally for above the BHA, indicating that the cut- downhole data from positions in the use in cold climates, was chosen for the tings accumulation was located between bottomhole assembly (BHA) for analysis exploration campaign because it is one the LWD and EMS sensors. Distributed and optimization of drilling parameters, of the most technologically advanced readings enabled the operator to follow transmitting data to the surface in real rigs in the entire Statoil ? eet. The rig the cuttings as they were circulated out time via the wired drill pipe network, has advanced automated drilling control of hole using low ? ow rate and RPM. EMS with or without ? ow.

Statoil, refers to a group of technologies the exact location of the tight hole condi-

The EFD viewer was developed to that provide signi? cant and remarkable tions, with the packoff monitored up the display time, depth, and along-string bene? ts. High-speed telemetry is part annulus using both downhole torque and measurements in a user-friendly way. It of the group and regarded as an enabler annular pressure.

Having knowledge of the packoff combines surface parameters, equiva- for future drilling automation. NOV event allowed Statoil to optimize their lent circulating density (ECD) in a heat delivered a high-speed telemetry system sweep strategy. The along-string sensors map, interpolated ECD at the shoe, and consisting of: were then used to monitor the sweep vibrations. Measured depth is shown • Wired drill pipe and pills’ position and manage pumps in an on vertical axis, while time is displayed associated telemetry network extremely accurate manner. The RPM on horizontal axis. Data is appended

The telemetry network enables instan- on right hand side before moving along measurements, noted as the curve sepa- taneous, bidirectional transmission of screen. Diagnostics are also color-coded ration between maximum and mini- downhole data. Telemetry speeds reach and make it easy to make decisions mum RPM (stick-slip), from the ASM up to 57,600 bits/sec versus the signi? - based on the continuous measurements.