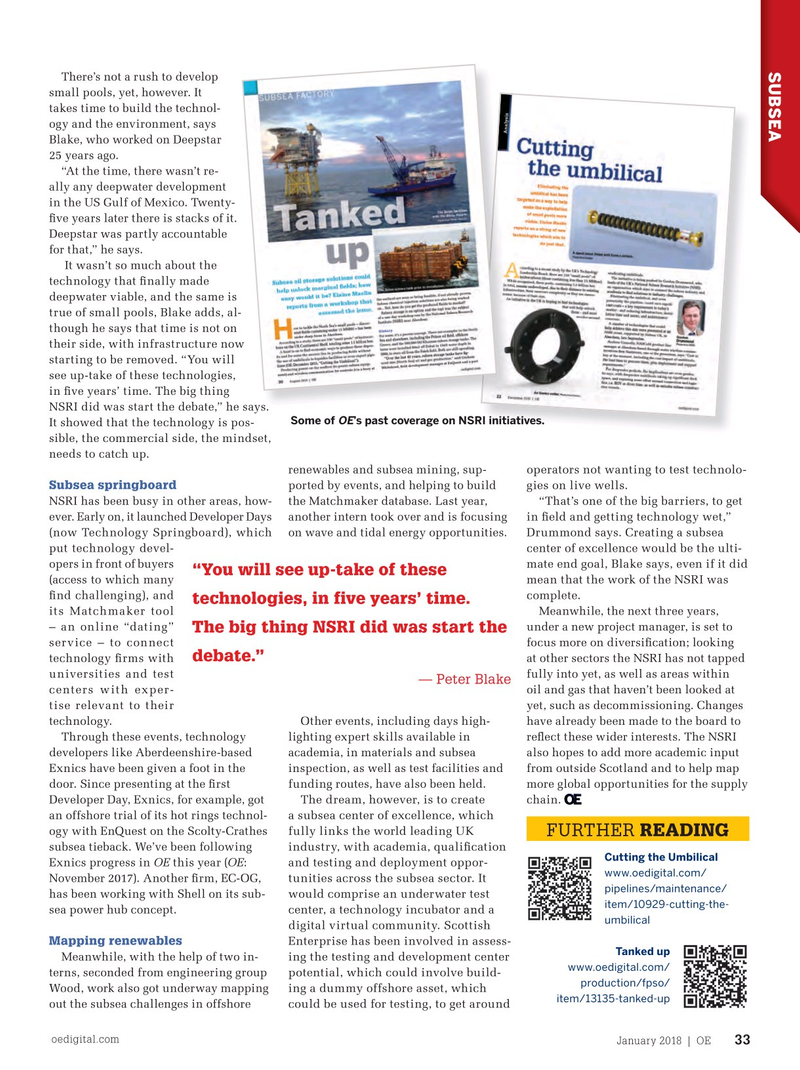 There’s not a rush to develop small pools, yet, however. It takes time to build the technol- ogy and the environment, says

Blake, who worked on Deepstar 25 years ago. “At the time, there wasn’t re- ally any deepwater development in the US Gulf of Mexico. Twenty- ? ve years later there is stacks of it.

Deepstar was partly accountable for that,” he says.

It showed that the technology is pos- sible, the commercial side, the mindset, needs to catch up.

Subsea springboard gies on live wells. ported by events, and helping to build

NSRI has been busy in other areas, how- the Matchmaker database. Last year, “That’s one of the big barriers, to get in ? eld and getting technology wet,” ever. Early on, it launched Developer Days another intern took over and is focusing

Drummond says. Creating a subsea (now Technology Springboard), which on wave and tidal energy opportunities. center of excellence would be the ulti- put technology devel- mate end goal, Blake says, even if it did opers in front of buyers “You will see up-take of these mean that the work of the NSRI was (access to which many ? nd challenging), and complete. technologies, in five years’ time. its Matchmaker tool Meanwhile, the next three years, – an online “dating” under a new project manager, is set to

The big thing NSRI did was start the service – to connect focus more on diversi? cation; looking debate.” technology ? rms with at other sectors the NSRI has not tapped universities and test fully into yet, as well as areas within — Peter Blake centers with exper- oil and gas that haven’t been looked at tise relevant to their yet, such as decommissioning. Changes technology. Other events, including days high- have already been made to the board to

Through these events, technology lighting expert skills available in re? ect these wider interests. The NSRI developers like Aberdeenshire-based academia, in materials and subsea also hopes to add more academic input

Exnics have been given a foot in the inspection, as well as test facilities and from outside Scotland and to help map door. Since presenting at the ? rst funding routes, have also been held. more global opportunities for the supply

The dream, however, is to create

Developer Day, Exnics, for example, got chain. a subsea center of excellence, which an offshore trial of its hot rings technol- fully links the world leading UK ogy with EnQuest on the Scolty-Crathes

Cutting the Umbilical and testing and deployment oppor-

Exnics progress in OE this year (OE: www.oedigital.com/ tunities across the subsea sector. It

November 2017). Another ? rm, EC-OG, pipelines/maintenance/ would comprise an underwater test has been working with Shell on its sub- item/10929-cutting-the- center, a technology incubator and a sea power hub concept. umbilical digital virtual community. Scottish

Enterprise has been involved in assess-

Meanwhile, with the help of two in- ing the testing and development center www.oedigital.com/ terns, seconded from engineering group potential, which could involve build- production/fpso/

Wood, work also got underway mapping ing a dummy offshore asset, which item/13135-tanked-up out the subsea challenges in offshore could be used for testing, to get around oedigital.com