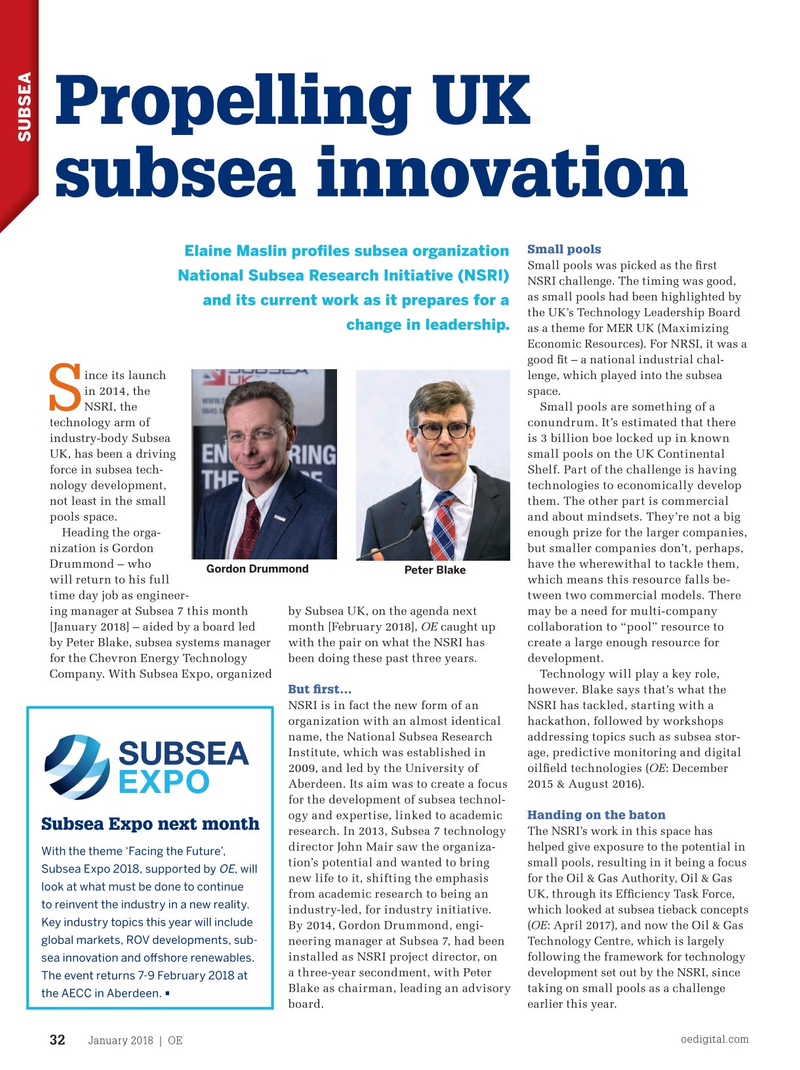 Small pools was picked as the ? rst

NSRI challenge. The timing was good, as small pools had been highlighted by and its current work as it prepares for a the UK’s Technology Leadership Board change in leadership. as a theme for MER UK (Maximizing

Economic Resources). For NRSI, it was a good ? t – a national industrial chal- ince its launch lenge, which played into the subsea in 2014, the space.

NSRI, the Small pools are something of a technology arm of conundrum. It’s estimated that there industry-body Subsea is 3 billion boe locked up in known

UK, has been a driving small pools on the UK Continental force in subsea tech- Shelf. Part of the challenge is having nology development, technologies to economically develop not least in the small them. The other part is commercial pools space. and about mindsets. They’re not a big

Drummond – who have the wherewithal to tackle them,

Peter Blake will return to his full which means this resource falls be- time day job as engineer- tween two commercial models. There ing manager at Subsea 7 this month by Subsea UK, on the agenda next may be a need for multi-company [January 2018] – aided by a board led month [February 2018], OE caught up collaboration to “pool” resource to by Peter Blake, subsea systems manager with the pair on what the NSRI has create a large enough resource for for the Chevron Energy Technology been doing these past three years. development.

Technology will play a key role,

But ? rst… however. Blake says that’s what the

NSRI is in fact the new form of an NSRI has tackled, starting with a organization with an almost identical hackathon, followed by workshops name, the National Subsea Research addressing topics such as subsea stor-

Institute, which was established in age, predictive monitoring and digital 2009, and led by the University of oil? eld technologies (OE: December

for the development of subsea technol-

Handing on the baton ogy and expertise, linked to academic

The NSRI’s work in this space has research. In 2013, Subsea 7 technology helped give exposure to the potential in director John Mair saw the organiza-

With the theme ‘Facing the Future’, small pools, resulting in it being a focus tion’s potential and wanted to bring

Subsea Expo 2018, supported by , will for the Oil & Gas Authority, Oil & Gas new life to it, shifting the emphasis look at what must be done to continue

UK, through its Ef? ciency Task Force, from academic research to being an to reinvent the industry in a new reality. which looked at subsea tieback concepts industry-led, for industry initiative.

Key industry topics this year will include (OE: April 2017), and now the Oil & Gas

Technology Centre, which is largely neering manager at Subsea 7, had been following the framework for technology installed as NSRI project director, on sea innovation and o