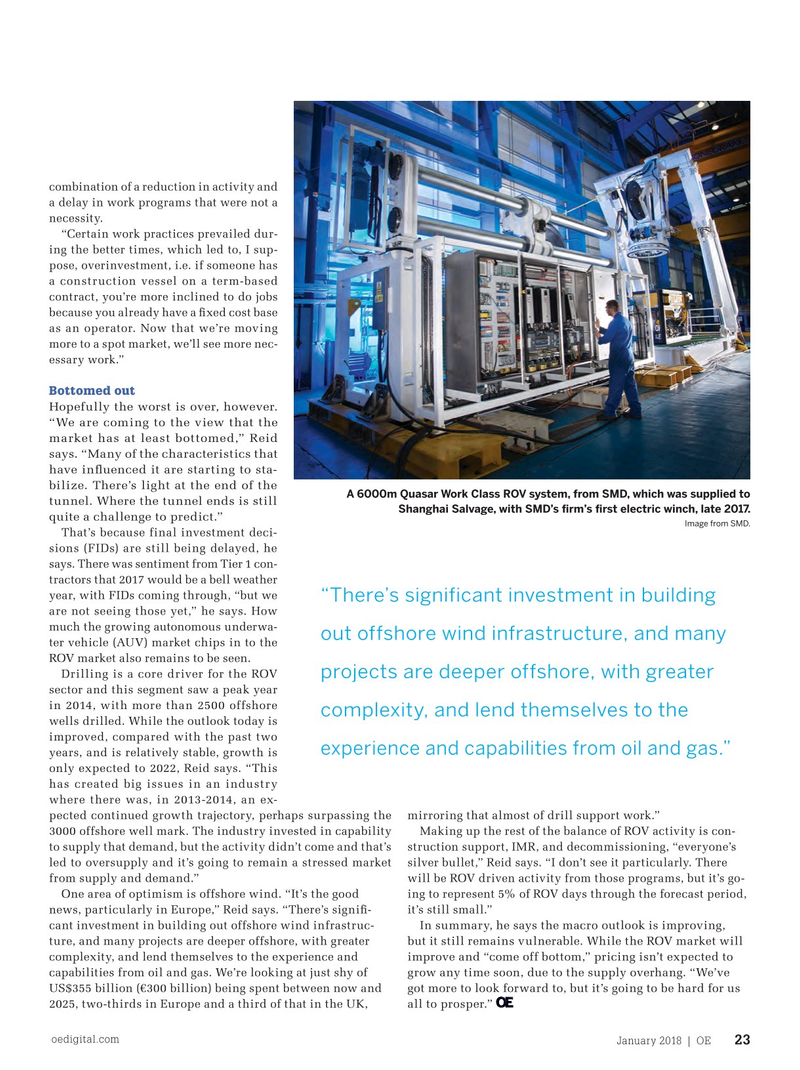 combination of a reduction in activity and a delay in work programs that were not a necessity. “Certain work practices prevailed dur- ing the better times, which led to, I sup- pose, overinvestment, i.e. if someone has a construction vessel on a term-based contract, you’re more inclined to do jobs because you already have a fxed cost base as an operator. Now that we’re moving more to a spot market, we’ll see more nec- essary work.”

Hopefully the worst is over, however. “We are coming to the view that the market has at least bottomed,” Reid says. “Many of the characteristics that have infuenced it are starting to sta- bilize. There’s light at the end of the

A 6000m Quasar Work Class ROV system, from SMD, which was supplied to tunnel. Where the tunnel ends is still

That’s because final investment deci- sions (FIDs) are still being delayed, he says. There was sentiment from Tier 1 con- tractors that 2017 would be a bell weather year, with FIDs coming through, “but we “There’s significant investment in building are not seeing those yet,” he says. How much the growing autonomous underwa- out offshore wind infrastructure, and many ter vehicle (AUV) market chips in to the

Drilling is a core driver for the ROV projects are deeper offshore, with greater sector and this segment saw a peak year in 2014, with more than 2500 offshore complexity, and lend themselves to the wells drilled. While the outlook today is improved, compared with the past two experience and capabilities from oil and gas.” years, and is relatively stable, growth is only expected to 2022, Reid says. “This has created big issues in an industry where there was, in 2013-2014, an ex- pected continued growth trajectory, perhaps surpassing the mirroring that almost of drill support work.” 3000 offshore well mark. The industry invested in capability

Making up the rest of the balance of ROV activity is con- struction support, IMR, and decommissioning, “everyone’s to supply that demand, but the activity didn’t come and that’s silver bullet,” Reid says. “I don’t see it particularly. There led to oversupply and it’s going to remain a stressed market will be ROV driven activity from those programs, but it’s go- from supply and demand.” ing to represent 5% of ROV days through the forecast period,

In summary, he says the macro outlook is improving, cant investment in building out offshore wind infrastruc- but it still remains vulnerable. While the ROV market will ture, and many projects are deeper offshore, with greater improve and “come off bottom,” pricing isn’t expected to complexity, and lend themselves to the experience and capabilities from oil and gas. We’re looking at just shy of grow any time soon, due to the supply overhang. “We’ve

US$355 billion (€300 billion) being spent between now and got more to look forward to, but it’s going to be hard for us 2025, two-thirds in Europe and a third of that in the UK, all to prosper.” oedigital.com