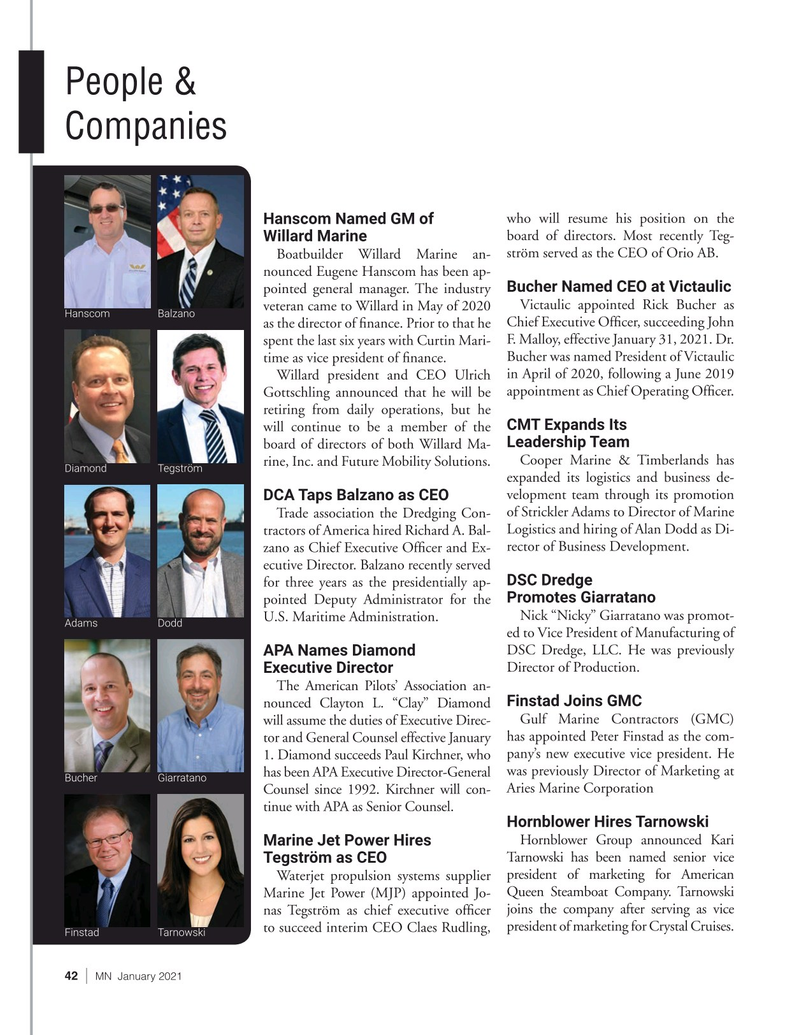 Companies who will resume his position on the

Hanscom Named GM of board of directors. Most recently Teg-

Boatbuilder Willard Marine an- ström served as the CEO of Orio AB.

nounced Eugene Hanscom has been ap-

Bucher Named CEO at Victaulic pointed general manager. The industry veteran came to Willard in May of 2020 Victaulic appointed Rick Bucher as

Hanscom Balzano as the director of ? nance. Prior to that he Chief Executive Of? cer, succeeding John spent the last six years with Curtin Mari- F. Malloy, effective January 31, 2021. Dr. time as vice president of ? nance. Bucher was named President of Victaulic

Willard president and CEO Ulrich in April of 2020, following a June 2019

Gottschling announced that he will be appointment as Chief Operating Of? cer.

retiring from daily operations, but he

CMT Expands Its will continue to be a member of the

Leadership Team board of directors of both Willard Ma- rine, Inc. and Future Mobility Solutions. Cooper Marine & Timberlands has

Trade association the Dredging Con- of Strickler Adams to Director of Marine tractors of America hired Richard A. Bal- Logistics and hiring of Alan Dodd as Di- zano as Chief Executive Of? cer and Ex- rector of Business Development.

DSC Dredge for three years as the presidentially ap-

Adams Dodd ed to Vice President of Manufacturing of

DSC Dredge, LLC. He was previously

The American Pilots’ Association an-

Tarnowski has been named senior vice