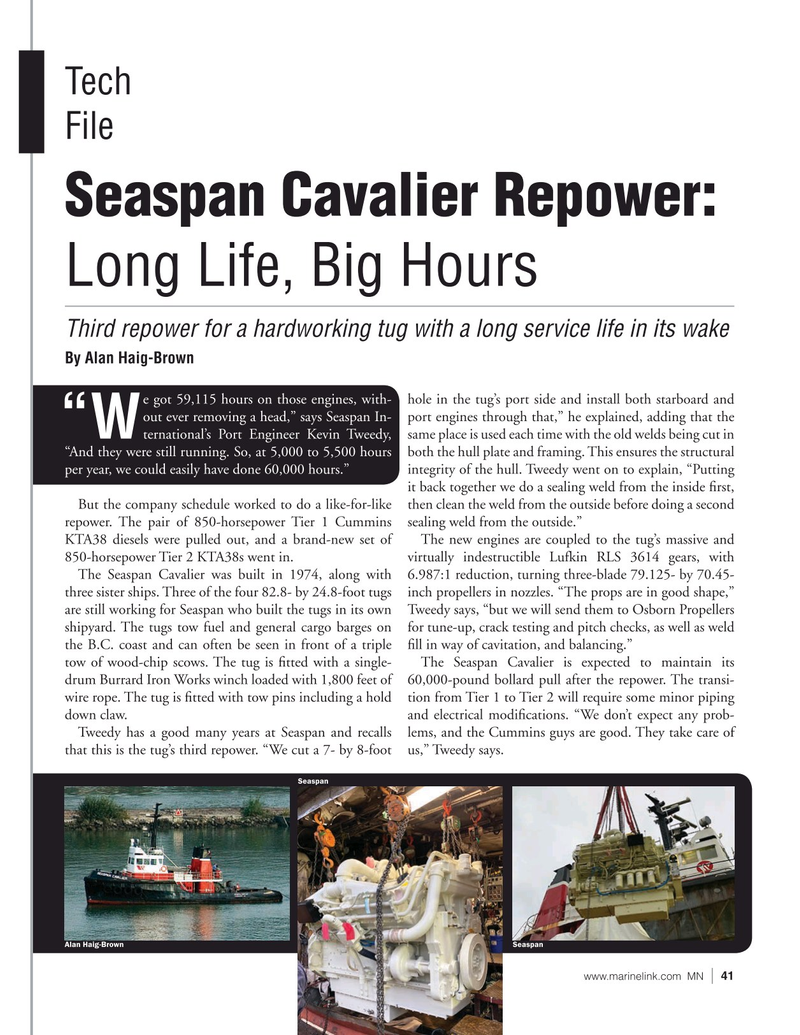 By Alan Haig-Brown e got 59,115 hours on those engines, with- hole in the tug’s port side and install both starboard and out ever removing a head,” says Seaspan In- port engines through that,” he explained, adding that the ternational’s Port Engineer Kevin Tweedy, same place is used each time with the old welds being cut in “W “And they were still running. So, at 5,000 to 5,500 hours both the hull plate and framing. This ensures the structural per year, we could easily have done 60,000 hours.” integrity of the hull. Tweedy went on to explain, “Putting it back together we do a sealing weld from the inside ? rst,

KTA38 diesels were pulled out, and a brand-new set of The new engines are coupled to the tug’s massive and 850-horsepower Tier 2 KTA38s went in. virtually indestructible Lufkin RLS 3614 gears, with

The Seaspan Cavalier was built in 1974, along with 6.987:1 reduction, turning three-blade 79.125- by 70.45- three sister ships. Three of the four 82.8- by 24.8-foot tugs inch propellers in nozzles. “The props are in good shape,” are still working for Seaspan who built the tugs in its own Tweedy says, “but we will send them to Osborn Propellers shipyard. The tugs tow fuel and general cargo barges on for tune-up, crack testing and pitch checks, as well as weld the B.C. coast and can often be seen in front of a triple ? ll in way of cavitation, and balancing.” tow of wood-chip scows. The tug is ? tted with a single- The Seaspan Cavalier is expected to maintain its drum Burrard Iron Works winch loaded with 1,800 feet of 60,000-pound bollard pull after the repower. The transi- wire rope. The tug is ? tted with tow pins including a hold tion from Tier 1 to Tier 2 will require some minor piping down claw. and electrical modi? cations. “We don’t expect any prob-

Tweedy has a good many years at Seaspan and recalls lems, and the Cummins guys are good. They take care of that this is the tug’s third repower. “We cut a 7- by 8-foot us,” Tweedy says.