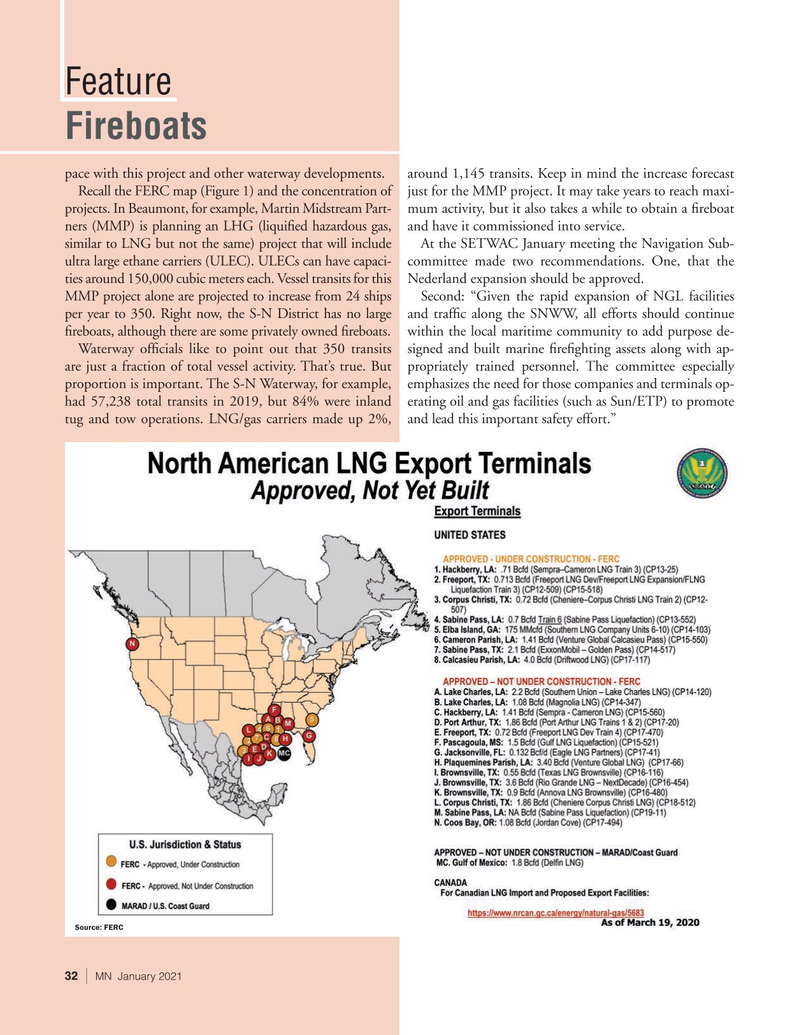 Fireboats pace with this project and other waterway developments. around 1,145 transits. Keep in mind the increase forecast

Recall the FERC map (Figure 1) and the concentration of just for the MMP project. It may take years to reach maxi- projects. In Beaumont, for example, Martin Midstream Part- mum activity, but it also takes a while to obtain a ? reboat ners (MMP) is planning an LHG (liqui? ed hazardous gas, and have it commissioned into service.

similar to LNG but not the same) project that will include At the SETWAC January meeting the Navigation Sub- ultra large ethane carriers (ULEC). ULECs can have capaci- committee made two recommendations. One, that the ties around 150,000 cubic meters each. Vessel transits for this Nederland expansion should be approved.

MMP project alone are projected to increase from 24 ships Second: “Given the rapid expansion of NGL facilities per year to 350. Right now, the S-N District has no large and traf? c along the SNWW, all efforts should continue ? reboats, although there are some privately owned ? reboats. within the local maritime community to add purpose de-

Waterway of? cials like to point out that 350 transits signed and built marine ? re? ghting assets along with ap- are just a fraction of total vessel activity. That’s true. But propriately trained personnel. The committee especially proportion is important. The S-N Waterway, for example, emphasizes the need for those companies and terminals op- had 57,238 total transits in 2019, but 84% were inland erating oil and gas facilities (such as Sun/ETP) to promote tug and tow operations. LNG/gas carriers made up 2%, and lead this important safety effort.”