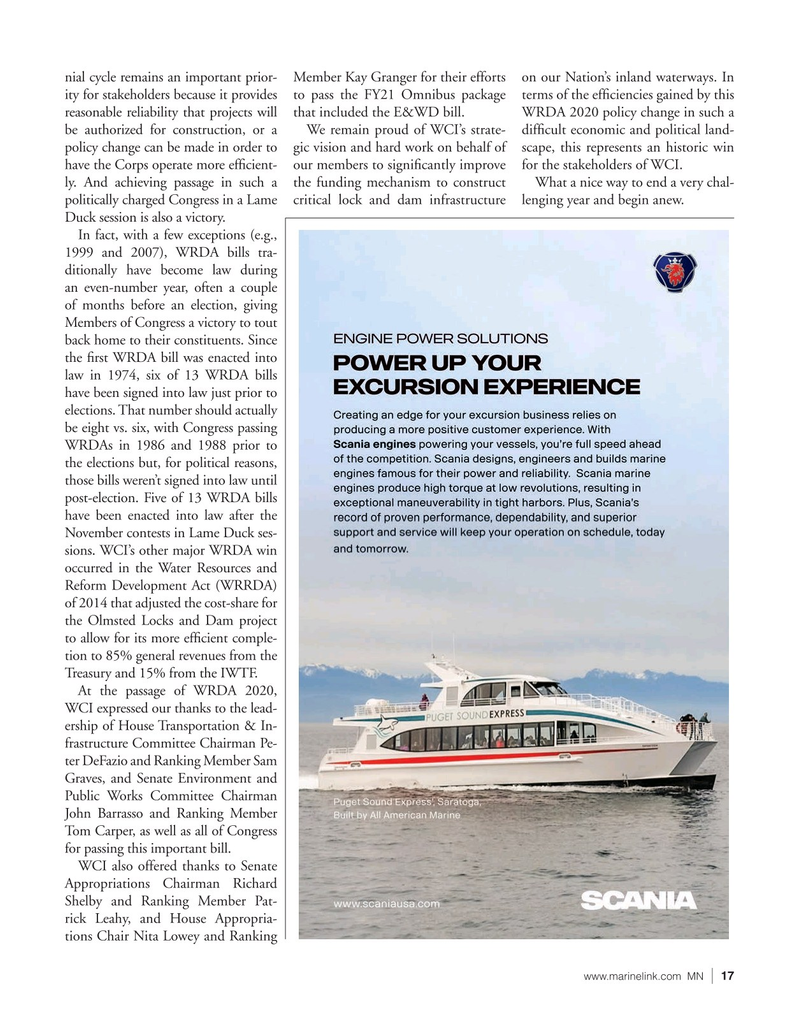 nial cycle remains an important prior- Member Kay Granger for their efforts on our Nation’s inland waterways. In ity for stakeholders because it provides to pass the FY21 Omnibus package terms of the ef? ciencies gained by this reasonable reliability that projects will that included the E&WD bill. WRDA 2020 policy change in such a be authorized for construction, or a We remain proud of WCI’s strate- dif? cult economic and political land- policy change can be made in order to gic vision and hard work on behalf of scape, this represents an historic win have the Corps operate more ef? cient- our members to signi? cantly improve for the stakeholders of WCI. ly. And achieving passage in such a the funding mechanism to construct What a nice way to end a very chal- politically charged Congress in a Lame critical lock and dam infrastructure lenging year and begin anew.

Duck session is also a victory.

In fact, with a few exceptions (e.g., 1999 and 2007), WRDA bills tra- ditionally have become law during an even-number year, often a couple of months before an election, giving

Members of Congress a victory to tout back home to their constituents. Since the ? rst WRDA bill was enacted into law in 1974, six of 13 WRDA bills have been signed into law just prior to elections. That number should actually be eight vs. six, with Congress passing

WRDAs in 1986 and 1988 prior to the elections but, for political reasons, those bills weren’t signed into law until post-election. Five of 13 WRDA bills have been enacted into law after the

Reform Development Act (WRRDA) of 2014 that adjusted the cost-share for the Olmsted Locks and Dam project to allow for its more ef? cient comple- tion to 85% general revenues from the

Treasury and 15% from the IWTF.

Graves, and Senate Environment and

Tom Carper, as well as all of Congress for passing this important bill.

WCI also offered thanks to Senate