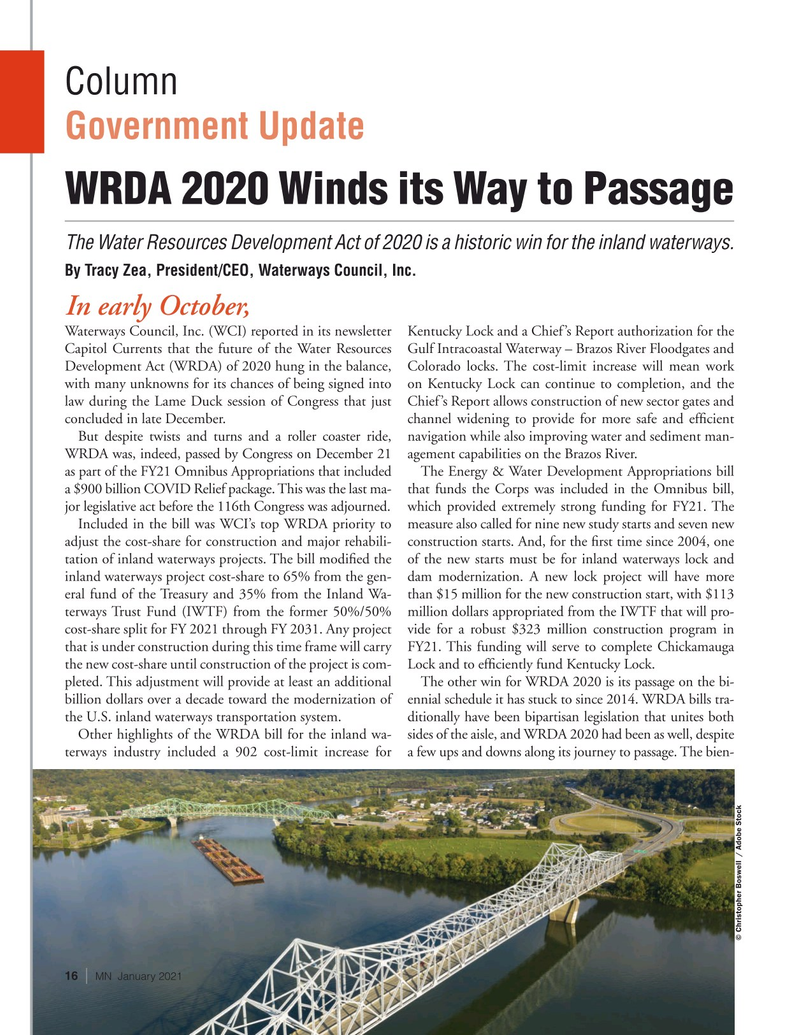 WRDA 2020 Winds its Way to Passage

The Water Resources Development Act of 2020 is a historic win for the inland waterways.

Waterways Council, Inc. (WCI) reported in its newsletter Kentucky Lock and a Chief’s Report authorization for the

Development Act (WRDA) of 2020 hung in the balance, Colorado locks. The cost-limit increase will mean work with many unknowns for its chances of being signed into on Kentucky Lock can continue to completion, and the law during the Lame Duck session of Congress that just Chief’s Report allows construction of new sector gates and concluded in late December. channel widening to provide for more safe and ef? cient

But despite twists and turns and a roller coaster ride, navigation while also improving water and sediment man-

WRDA was, indeed, passed by Congress on December 21 agement capabilities on the Brazos River.

as part of the FY21 Omnibus Appropriations that included The Energy & Water Development Appropriations bill a $900 billion COVID Relief package. This was the last ma- that funds the Corps was included in the Omnibus bill, jor legislative act before the 116th Congress was adjourned. which provided extremely strong funding for FY21. The

Included in the bill was WCI’s top WRDA priority to measure also called for nine new study starts and seven new adjust the cost-share for construction and major rehabili- construction starts. And, for the ? rst time since 2004, one tation of inland waterways projects. The bill modi? ed the of the new starts must be for inland waterways lock and inland waterways project cost-share to 65% from the gen- dam modernization. A new lock project will have more eral fund of the Treasury and 35% from the Inland Wa- than $15 million for the new construction start, with $113 terways Trust Fund (IWTF) from the former 50%/50% million dollars appropriated from the IWTF that will pro- cost-share split for FY 2021 through FY 2031. Any project vide for a robust $323 million construction program in that is under construction during this time frame will carry FY21. This funding will serve to complete Chickamauga the new cost-share until construction of the project is com- Lock and to ef? ciently fund Kentucky Lock. pleted. This adjustment will provide at least an additional The other win for WRDA 2020 is its passage on the bi- billion dollars over a decade toward the modernization of ennial schedule it has stuck to since 2014. WRDA bills tra- the U.S. inland waterways transportation system. ditionally have been bipartisan legislation that unites both

Other highlights of the WRDA bill for the inland wa- sides of the aisle, and WRDA 2020 had been as well, despite terways industry included a 902 cost-limit increase for a few ups and downs along its journey to passage. The bien- © Christopher Boswell / Adobe Stock 16 | MN January 2021