The Mighty Mississippi: Taming the Bull

The beneficial use of dredge material sets a record in FY 2019. And, we’re just getting started. Funding will be the key.

In mid-November 2018, concerns began to rise about an unseasonably high river stages on the Upper Mississippi River Basin generated by significant precipitation events. As a navigation representative on the Lower Mississippi River, I have unfortunately learned that the river system is changing and that precipitation around the world has been increasing for decades. In late 2015, I had similar concerns but downplayed them because high river on the Mississippi River Ship Channel typically holds until March or so. Little did we know we were about to become part of history and that the earliest ever opening of the Bonnet Carré Spillway was just a few weeks away.

The 2016 opening of the Spillway on January 10, 2016 was a sign that our lives were changing although at the time many thought this to be just another anomaly, since then multiple records have been broken including the repeated operation of the Spillway as water management structure for flood control or more appropriately for flood management. No one controls the Mighty Mississippi, although there is an experienced team of subject matter experts that continually try. The truth is, it is kind of like managing a bull ride – hold on.

Uncharted Waters
Any one of the three Spillway openings since 2016 should be the proverbial wake-up call that we as a nation should focus on. That’s because the Mississippi River Ship Channel connects more miles of navigable waterways than the rest of the world combined and carries an annual economic impact of nearly $750 billion and is directly linked to approximately 2.5 million jobs. The 2018 opening of the Bonnet Carré Spillway only lasted 23 days, but it did provide ample warning that these events are occurring more frequently. That event, however, will forever be tied to the record broken by the opening in back-to-back years with that of February 2019.

It was clear that few, if any stakeholders really understood that we were then in a flood fight for the ages. Then came the mind-numbing stage level rise that led to the second opening of 2019. The Great Flood of 2019 eclipsed stage level records across the majority of the Mississippi River Basin, especially below Cairo, IL. All but a handful of mainline river cities established record length of flood stages. Where records were not eclipsed, it was because of improvements made to the system including the addition of backwater storage added by the Flood Control Act of 1928.

The river stage at Baton Rouge was above flood stage for 211 days, shattering the previous record set during the 1927 Flood (135 days). The stage level at New Orleans was above 11 feet for 292 days even with the Bonnet Carré opened for 123 of them. The first opening lasted 44 days and the second opening (79 days) is the longest single opening of this critical flood control structure. A river stage of 10 feet and rising at New Orleans is also a safe approximation for when we need to dredge the revolving door to International Trade known as Southwest Pass. In spite of heroic efforts and a record level of Emergency and Supplemental Federal Funding draft restrictions were required in Southwest Pass for 205 days.

The impact of this collective event was catastrophic. Preliminary estimates from the U.S. Army Corps of Engineers say that the extended high river and historic flood event impacted $6-7 billion worth of cargo that would typically transit through the Mississippi River’s Southwest Pass.

Digging Deep for Answers
Where did all the water come from? It starts with the wettest 12-month period since recordkeeping began in 1895. A NOAA report released in July 2019 documented that the rain – and plenty of it – that fell in June 2019 only added to a record-breaking 12 months of precipitation for the contiguous United States. Beyond this, wet conditions from July 2018 through June 2019 resulted in a new 12-month precipitation record in the U.S., with an average of 37.86 inches (7.9 inches above average).

All that said; ‘if you have seen one flood, you have seen one flood.’ Each has different impacts and recovery comes in all shapes of the mud puddles. Few can argue that our nation’s three greatest floods were along the Mississippi in 1927, 1973 and 2019. An important metric is related to the volume of water involved. By comparing ‘acre feet’ as a water-volume measuring stick, it can be seen that not only did The Great Flood of 2019 pass more water than the other two, but it did so by a considerable margin.

Flooding along the Mississippi River has increased both in frequency and magnitude during the past three to five decades. During the 49-year period of 1970 to 2018, stages at Cairo, Illinois – the confluence of the Mississippi and Ohio Rivers – have exceeded major flood stage of 52.0 feet 16 times, as opposed to 13 times during the 72-year period of 1898 to 1969. Indeed, it has been well documented that total annual precipitation has been increasing, not only across the United States, but worldwide, over the past 100 years.

Always looking for the positives, the Ship Channel is at authorized channel dimensions and the beneficial use of dredged material will continue to add acreage and create New Louisiana on annual basis. Since cutterhead dredges were added to the toolbox for channel maintenance in Southwest Pass, approximately 9,500 acres of wetlands have been restored below Venice in the environmentally sensitive birds’-foot delta. This critical acreage helps protect the Ship Channel and restores migratory bird flyways and provides habitat for numerous other species.

This beneficial use of dredged material project – or Sediment Recycling – is the largest wetlands restoration project in the World, involving 132+ million cubic yards (mcy) of material used to restore almost 10,000 acres in a 10-year period.

In fact, the top three records for the beneficial use of dredged material were all set in the last four fiscal years. During FY2019 alone, 25.60 mcy of dredged material was utilized while dredging the channel and the Hopper Dredge Disposal Area. 2019 saw records broken for record high-water, record funding (thankfully) and record cubic yards dredged.

In order to complete the goals of Flood Control Act of 1928, approximately $5 Billion in funds are needed for water infrastructure repair and replacements, including adding backwater storage, repairing levees, stabilizing banks and repairs to the nation’s aging system of locks and dams. No less important is the need to facilitate continually increasing international trade with deepening and maintenance activities.

The present stage at New Orleans is 10.93 feet and that, too, is unseasonably high, but the metrics are all rapidly changing. What constitutes an ‘average year’ is now a constantly moving target. The eyes of the world are intently focused on the Mississippi River. That’s because much of our economic success as a nation depends on our collectively ability to keep ‘the bull’ between the levees. 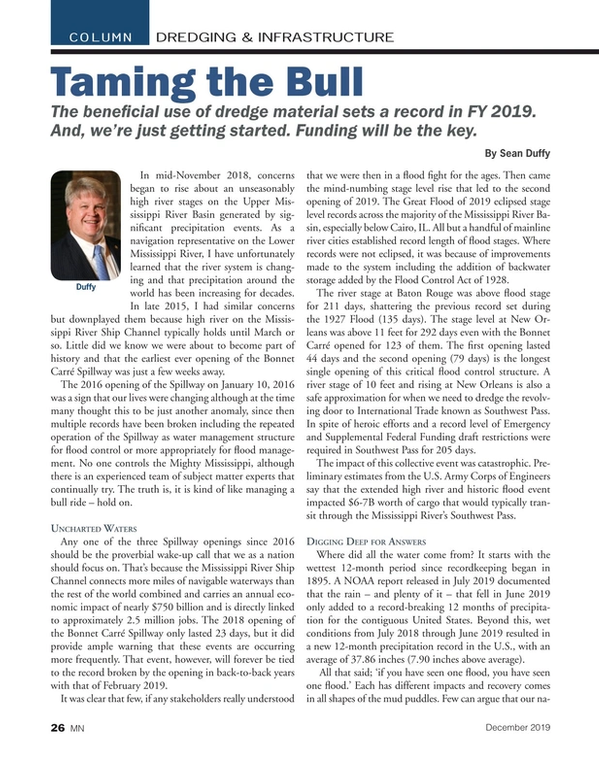 Other stories from December 2019 issue