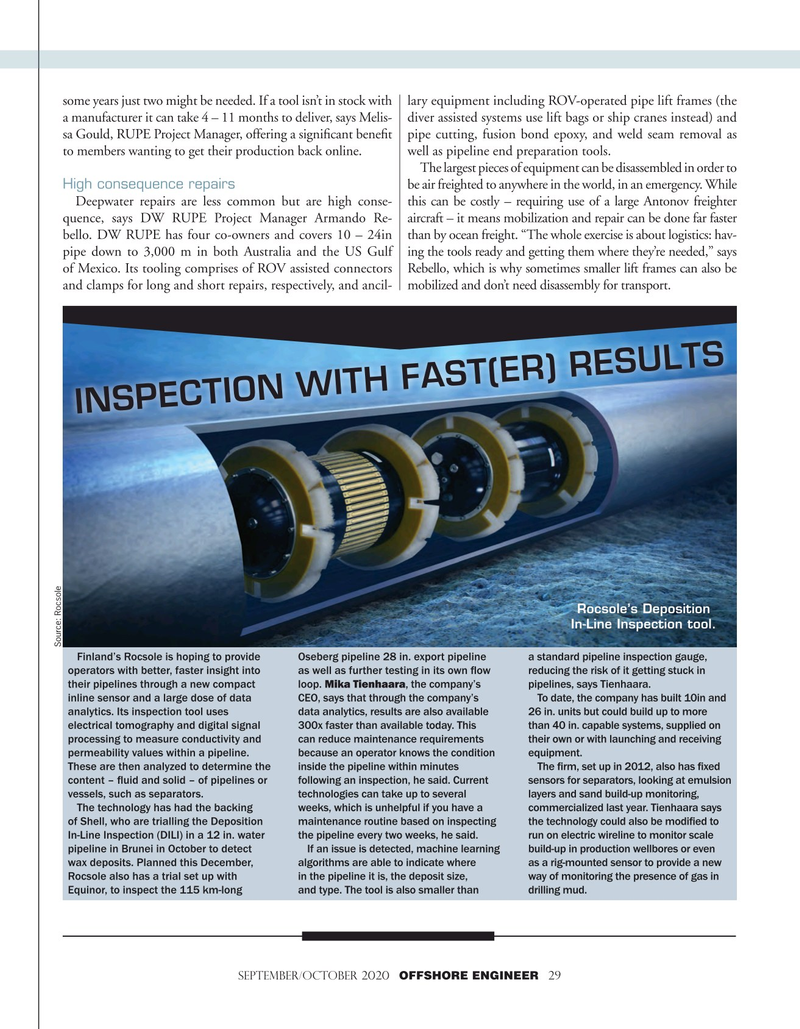 some years just two might be needed. If a tool isn’t in stock with lary equipment including ROV-operated pipe lift frames (the a manufacturer it can take 4 – 11 months to deliver, says Melis- diver assisted systems use lift bags or ship cranes instead) and sa Gould, RUPE Project Manager, offering a signifcant beneft pipe cutting, fusion bond epoxy, and weld seam removal as to members wanting to get their production back online. well as pipeline end preparation tools.

The largest pieces of equipment can be disassembled in order to

High consequence repairs be air freighted to anywhere in the world, in an emergency. While

Deepwater repairs are less common but are high conse- this can be costly – requiring use of a large Antonov freighter quence, says DW RUPE Project Manager Armando Re- aircraft – it means mobilization and repair can be done far faster bello. DW RUPE has four co-owners and covers 10 – 24in than by ocean freight. “The whole exercise is about logistics: hav- pipe down to 3,000 m in both Australia and the US Gulf ing the tools ready and getting them where they’re needed,” says of Mexico. Its tooling comprises of ROV assisted connectors Rebello, which is why sometimes smaller lift frames can also be and clamps for long and short repairs, respectively, and ancil- mobilized and don’t need disassembly for transport.

Finland’s Rocsole is hoping to provide Oseberg pipeline 28 in. export pipeline a standard pipeline inspection gauge, operators with better, faster insight into as well as further testing in its own fow reducing the risk of it getting stuck in their pipelines through a new compact loop. Mika Tienhaara, the company’s pipelines, says Tienhaara.

inline sensor and a large dose of data CEO, says that through the company’s To date, the company has built 10in and analytics. Its inspection tool uses data analytics, results are also available 26 in. units but could build up to more electrical tomography and digital signal 300x faster than available today. This than 40 in. capable systems, supplied on processing to measure conductivity and can reduce maintenance requirements their own or with launching and receiving permeability values within a pipeline. because an operator knows the condition equipment.

These are then analyzed to determine the inside the pipeline within minutes The frm, set up in 2012, also has fxed content – fuid and solid – of pipelines or following an inspection, he said. Current sensors for separators, looking at emulsion vessels, such as separators. technologies can take up to several layers and sand build-up monitoring,

The technology has had the backing weeks, which is unhelpful if you have a commercialized last year. Tienhaara says of Shell, who are trialling the Deposition maintenance routine based on inspecting the technology could also be modifed to

In-Line Inspection (DILI) in a 12 in. water the pipeline every two weeks, he said. run on electric wireline to monitor scale pipeline in Brunei in October to detect If an issue is detected, machine learning build-up in production wellbores or even wax deposits. Planned this December, algorithms are able to indicate where as a rig-mounted sensor to provide a new

Rocsole also has a trial set up with in the pipeline it is, the deposit size, way of monitoring the presence of gas in

Equinor, to inspect the 115 km-long and type. The tool is also smaller than drilling mud.