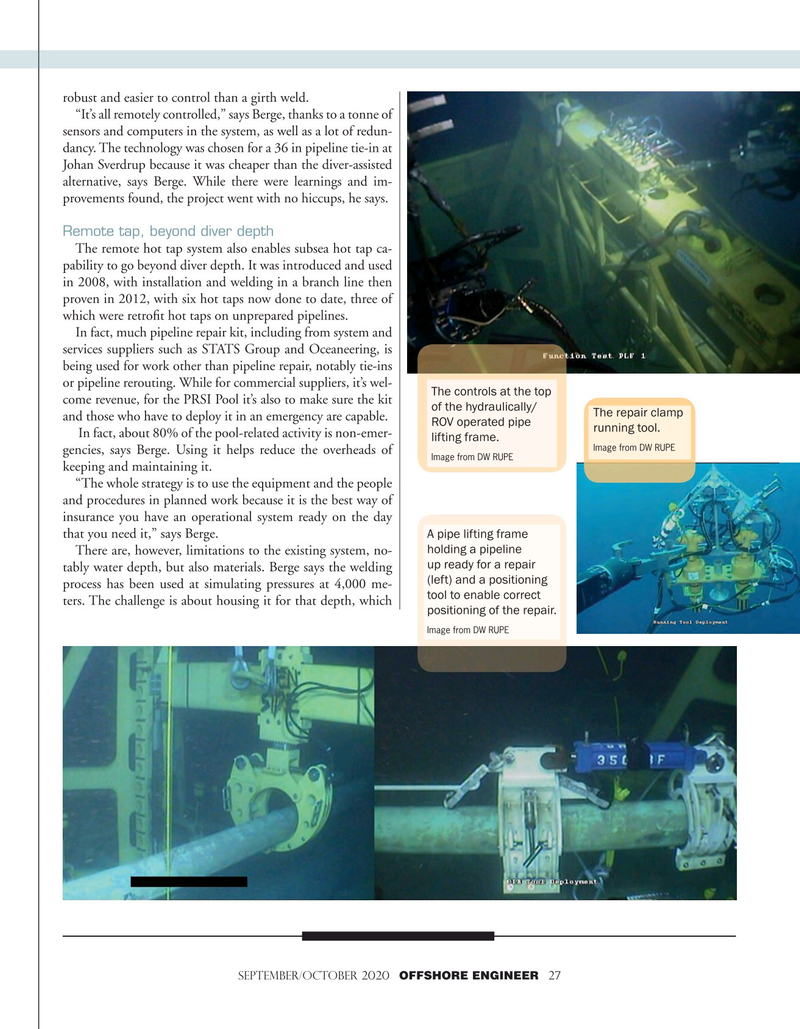 robust and easier to control than a girth weld.

“It’s all remotely controlled,” says Berge, thanks to a tonne of sensors and computers in the system, as well as a lot of redun- dancy. The technology was chosen for a 36 in pipeline tie-in at

Johan Sverdrup because it was cheaper than the diver-assisted alternative, says Berge. While there were learnings and im- provements found, the project went with no hiccups, he says.

The remote hot tap system also enables subsea hot tap ca- pability to go beyond diver depth. It was introduced and used in 2008, with installation and welding in a branch line then proven in 2012, with six hot taps now done to date, three of which were retroft hot taps on unprepared pipelines.

In fact, much pipeline repair kit, including from system and services suppliers such as STATS Group and Oceaneering, is being used for work other than pipeline repair, notably tie-ins or pipeline rerouting. While for commercial suppliers, it’s wel-

The controls at the top come revenue, for the PRSI Pool it’s also to make sure the kit of the hydraulically/

The repair clamp and those who have to deploy it in an emergency are capable.

ROV operated pipe running tool. In fact, about 80% of the pool-related activity is non-emer- lifting frame.

Image from DW RUPE keeping and maintaining it. “The whole strategy is to use the equipment and the people and procedures in planned work because it is the best way of insurance you have an operational system ready on the day that you need it,” says Berge.

There are, however, limitations to the existing system, no- up ready for a repair tably water depth, but also materials. Berge says the welding (left) and a positioning process has been used at simulating pressures at 4,000 me- tool to enable correct ters. The challenge is about housing it for that depth, which positioning of the repair.