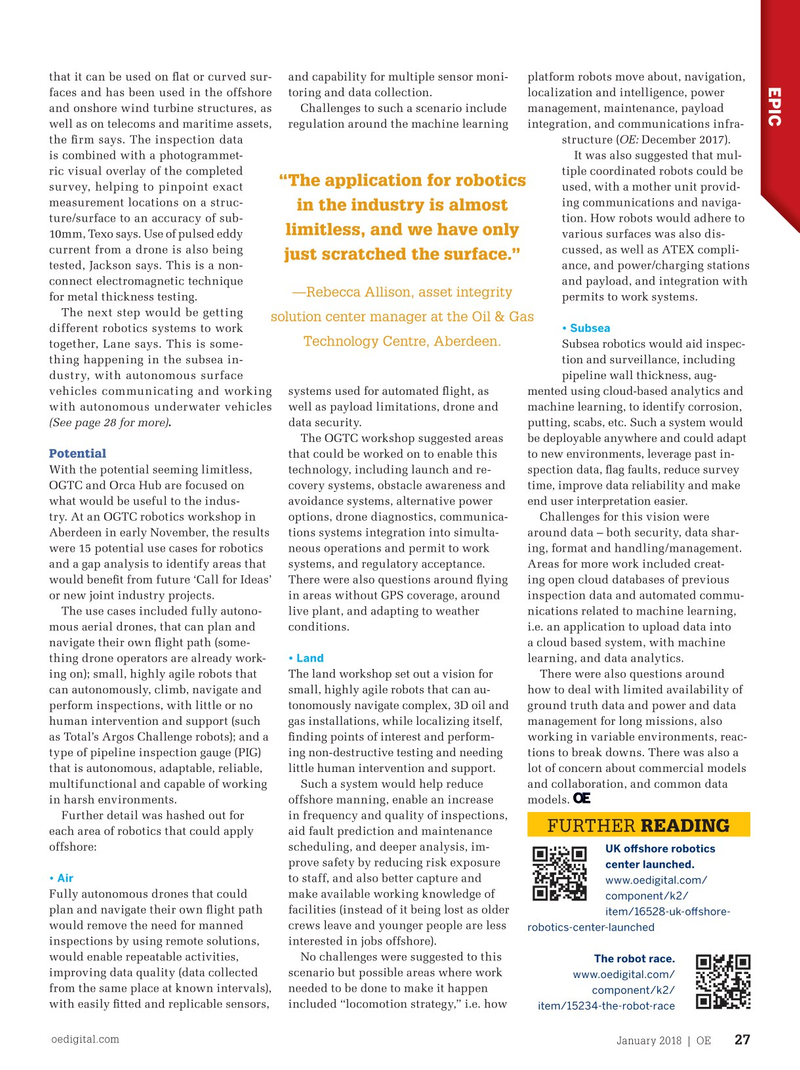 that it can be used on ? at or curved sur- and capability for multiple sensor moni- platform robots move about, navigation,

EPIC faces and has been used in the offshore toring and data collection. localization and intelligence, power and onshore wind turbine structures, as Challenges to such a scenario include management, maintenance, payload well as on telecoms and maritime assets, regulation around the machine learning integration, and communications infra- the ? rm says. The inspection data structure (OE: December 2017). is combined with a photogrammet- It was also suggested that mul- ric visual overlay of the completed tiple coordinated robots could be “The application for robotics survey, helping to pinpoint exact used, with a mother unit provid- measurement locations on a struc- ing communications and naviga- in the industry is almost ture/surface to an accuracy of sub- tion. How robots would adhere to limitless, and we have only 10mm, Texo says. Use of pulsed eddy various surfaces was also dis- current from a drone is also being cussed, as well as ATEX compli- just scratched the surface.” tested, Jackson says. This is a non- ance, and power/charging stations connect electromagnetic technique and payload, and integration with —Rebecca Allison, asset integrity for metal thickness testing. permits to work systems.

Technology Centre, Aberdeen. together, Lane says. This is some- Subsea robotics would aid inspec- thing happening in the subsea in- tion and surveillance, including dustry, with autonomous surface pipeline wall thickness, aug- vehicles communicating and working systems used for automated ? ight, as mented using cloud-based analytics and with autonomous underwater vehicles well as payload limitations, drone and machine learning, to identify corrosion, (See page 28 for more). data security. putting, scabs, etc. Such a system would

The OGTC workshop suggested areas be deployable anywhere and could adapt

Potential that could be worked on to enable this to new environments, leverage past in-

With the potential seeming limitless, technology, including launch and re- spection data, ? ag faults, reduce survey

OGTC and Orca Hub are focused on covery systems, obstacle awareness and time, improve data reliability and make what would be useful to the indus- avoidance systems, alternative power end user interpretation easier.

try. At an OGTC robotics workshop in options, drone diagnostics, communica- Challenges for this vision were

Aberdeen in early November, the results tions systems integration into simulta- around data – both security, data shar- were 15 potential use cases for robotics neous operations and permit to work ing, format and handling/management. and a gap analysis to identify areas that systems, and regulatory acceptance. Areas for more work included creat- would bene? t from future ‘Call for Ideas’ There were also questions around ? ying ing open cloud databases of previous or new joint industry projects. in areas without GPS coverage, around inspection data and automated commu-

The use cases included fully autono- live plant, and adapting to weather nications related to machine learning, mous aerial drones, that can plan and conditions. i.e. an application to upload data into navigate their own ? ight path (some- a cloud based system, with machine • Land thing drone operators are already work- learning, and data analytics. ing on); small, highly agile robots that The land workshop set out a vision for There were also questions around can autonomously, climb, navigate and small, highly agile robots that can au- how to deal with limited availability of perform inspections, with little or no tonomously navigate complex, 3D oil and ground truth data and power and data human intervention and support (such gas installations, while localizing itself, management for long missions, also as Total’s Argos Challenge robots); and a ? nding points of interest and perform- working in variable environments, reac- type of pipeline inspection gauge (PIG) ing non-destructive testing and needing tions to break downs. There was also a that is autonomous, adaptable, reliable, little human intervention and support. lot of concern about commercial models multifunctional and capable of working Such a system would help reduce and collaboration, and common data in harsh environments. offshore manning, enable an increase models.

Further detail was hashed out for in frequency and quality of inspections,

FURTHER READING each area of robotics that could apply aid fault prediction and maintenance offshore: scheduling, and deeper analysis, im-