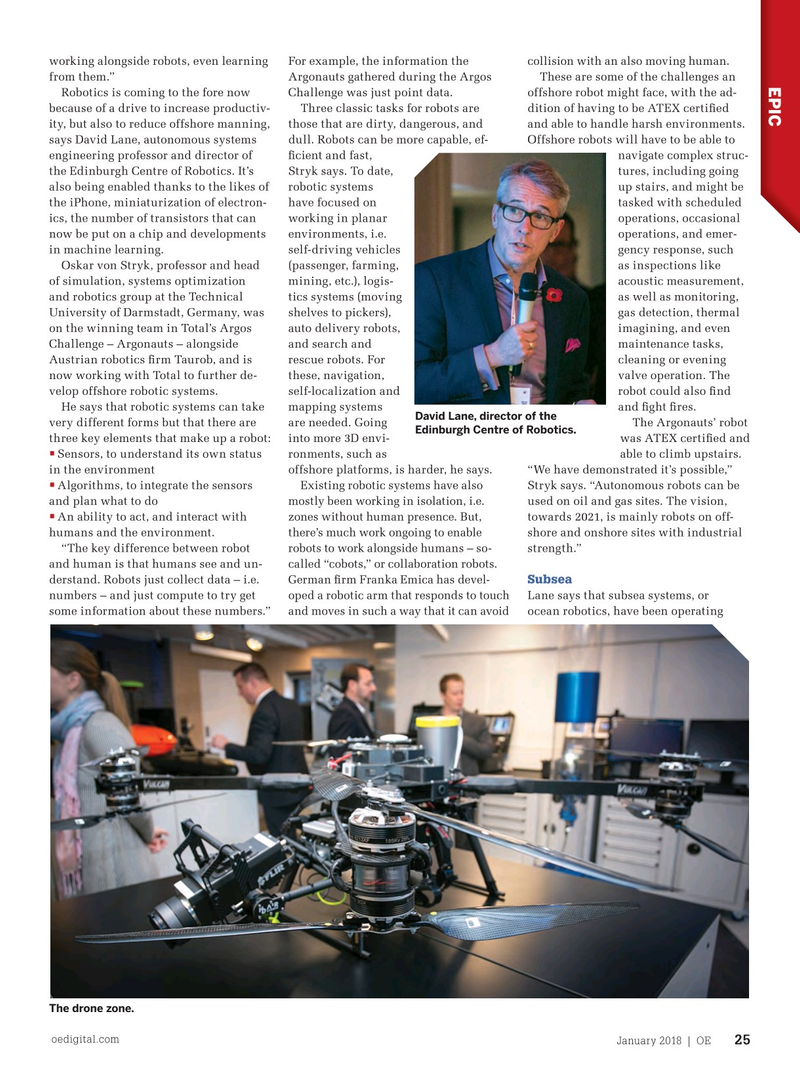 working alongside robots, even learning For example, the information the collision with an also moving human. from them.” Argonauts gathered during the Argos These are some of the challenges an

Robotics is coming to the fore now Challenge was just point data. offshore robot might face, with the ad- because of a drive to increase productiv- Three classic tasks for robots are dition of having to be ATEX certi? ed ity, but also to reduce offshore manning, those that are dirty, dangerous, and and able to handle harsh environments. says David Lane, autonomous systems dull. Robots can be more capable, ef- Offshore robots will have to be able to engineering professor and director of ? cient and fast, navigate complex struc- the Edinburgh Centre of Robotics. It’s Stryk says. To date, tures, including going also being enabled thanks to the likes of robotic systems up stairs, and might be the iPhone, miniaturization of electron- have focused on tasked with scheduled ics, the number of transistors that can working in planar operations, occasional now be put on a chip and developments environments, i.e. operations, and emer- in machine learning. self-driving vehicles gency response, such

University of Darmstadt, Germany, was shelves to pickers), gas detection, thermal on the winning team in Total’s Argos auto delivery robots, imagining, and even

Challenge – Argonauts – alongside and search and maintenance tasks,

He says that robotic systems can take mapping systems and ? ght ? res.

David Lane, director of the very different forms but that there are are needed. Going The Argonauts’ robot

Edinburgh Centre of Robotics. three key elements that make up a robot: into more 3D envi- was ATEX certi? ed and •

Sensors, to understand its own status ronments, such as able to climb upstairs. in the environment offshore platforms, is harder, he says. “We have demonstrated it’s possible,” • Existing robotic systems have also

Algorithms, to integrate the sensors Stryk says. “Autonomous robots can be mostly been working in isolation, i.e. and plan what to do used on oil and gas sites. The vision, •

An ability to act, and interact with towards 2021, is mainly robots on off- zones without human presence. But,

Terrestrial robots on show at the humans and the environment. shore and onshore sites with industrial there’s much work ongoing to enable

Images from the “The key difference between robot strength.” robots to work alongside humans – so-

and human is that humans see and un- called “cobots,” or collaboration robots.

German ? rm Franka Emica has devel- numbers – and just compute to try get Lane says that subsea systems, or oped a robotic arm that responds to touch some information about these numbers.” ocean robotics, have been operating and moves in such a way that it can avoid