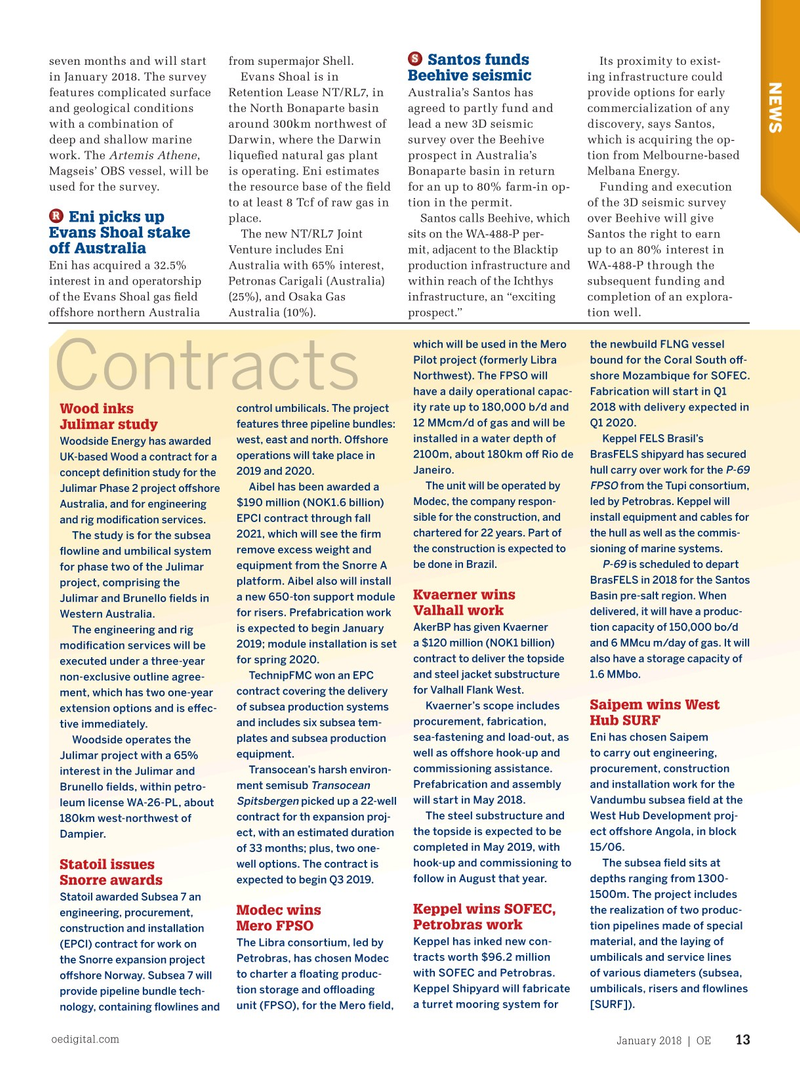 S seven months and will start Santos funds from supermajor Shell. Its proximity to exist-

Evans Shoal is in in January 2018. The survey ing infrastructure could

Retention Lease NT/RL7, in Australia’s Santos has features complicated surface provide options for early the North Bonaparte basin agreed to partly fund and and geological conditions commercialization of any around 300km northwest of lead a new 3D seismic with a combination of discovery, says Santos,

Darwin, where the Darwin survey over the Beehive deep and shallow marine which is acquiring the op- lique? ed natural gas plant prospect in Australia’s work. The Artemis Athene, tion from Melbourne-based is operating. Eni estimates Bonaparte basin in return

Magseis’ OBS vessel, will be

the resource base of the ? eld for an up to 80% farm-in op- Funding and execution used for the survey.

to at least 8 Tcf of raw gas in tion in the permit. of the 3D seismic survey

Eni picks up Santos calls Beehive, which place. over Beehive will give

Santos the right to earn off Australia

Venture includes Eni mit, adjacent to the Blacktip up to an 80% interest in

Eni has acquired a 32.5% Australia with 65% interest, production infrastructure and

WA-488-P through the interest in and operatorship Petronas Carigali (Australia) within reach of the Ichthys subsequent funding and of the Evans Shoal gas ? eld (25%), and Osaka Gas infrastructure, an “exciting completion of an explora- offshore northern Australia Australia (10%). prospect.” tion well.

which will be used in the Mero the newbuild FLNG vessel