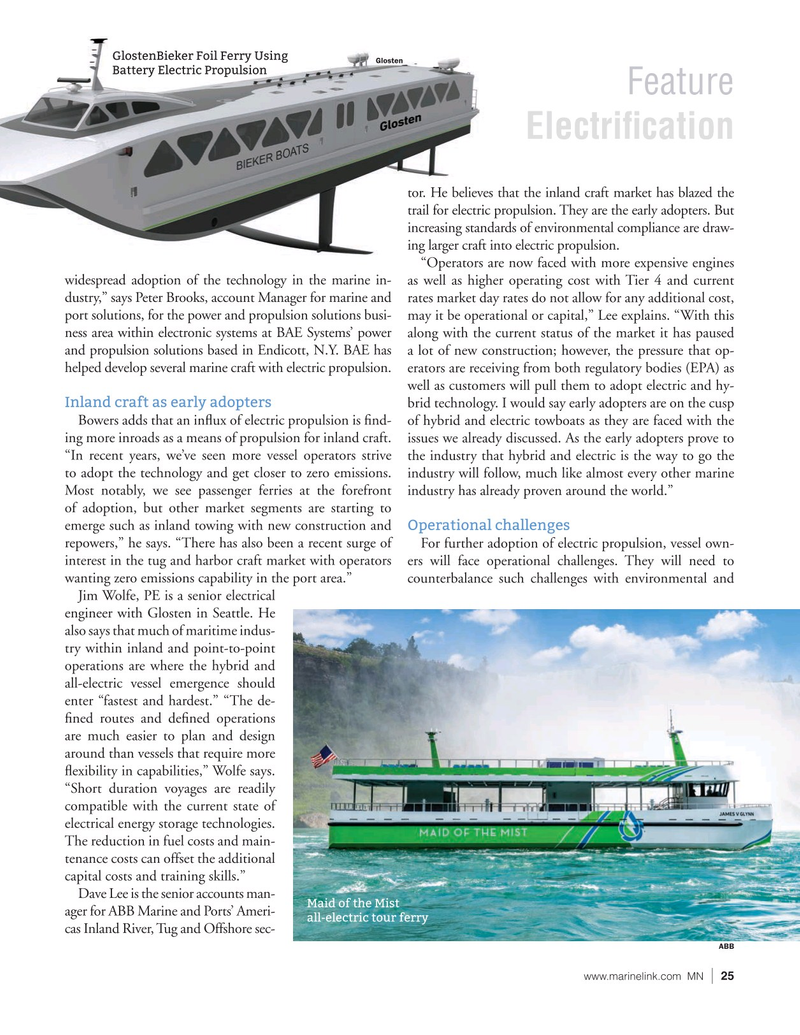 “O “Operators are now faced with more expensive engines widespread adoption of the technology in the marine in- as well as higher operating cost with Tier 4 and current dustry,” says Peter Brooks, account Manager for marine and rates market day rates do not allow for any additional cost, port solutions, for the power and propulsion solutions busi- may it be operational or capital,” Lee explains. “With this ness area within electronic systems at BAE Systems’ power along with the current status of the market it has paused and propulsion solutions based in Endicott, N.Y. BAE has a lot of new construction; however, the pressure that op- helped develop several marine craft with electric propulsion. erators are receiving from both regulatory bodies (EPA) as well as customers will pull them to adopt electric and hy-

Bowers adds that an in? ux of electric propulsion is ? nd- of hybrid and electric towboats as they are faced with the ing more inroads as a means of propulsion for inland craft. issues we already discussed. As the early adopters prove to “In recent years, we’ve seen more vessel operators strive the industry that hybrid and electric is the way to go the to adopt the technology and get closer to zero emissions. industry will follow, much like almost every other marine

Most notably, we see passenger ferries at the forefront industry has already proven around the world.” of adoption, but other market segments are starting to emerge such as inland towing with new construction and Operational challenges repowers,” he says. “There has also been a recent surge of For further adoption of electric propulsion, vessel own- interest in the tug and harbor craft market with operators ers will face operational challenges. They will need to wanting zero emissions capability in the port area.” counterbalance such challenges with environmental and

Jim Wolfe, PE is a senior electrical engineer with Glosten in Seattle. He also says that much of maritime indus- try within inland and point-to-point operations are where the hybrid and all-electric vessel emergence should enter “fastest and hardest.” “The de- ? ned routes and de? ned operations are much easier to plan and design around than vessels that require more ? exibility in capabilities,” Wolfe says. “Short duration voyages are readily compatible with the current state of electrical energy storage technologies.

The reduction in fuel costs and main- tenance costs can offset the additional capital costs and training skills.”