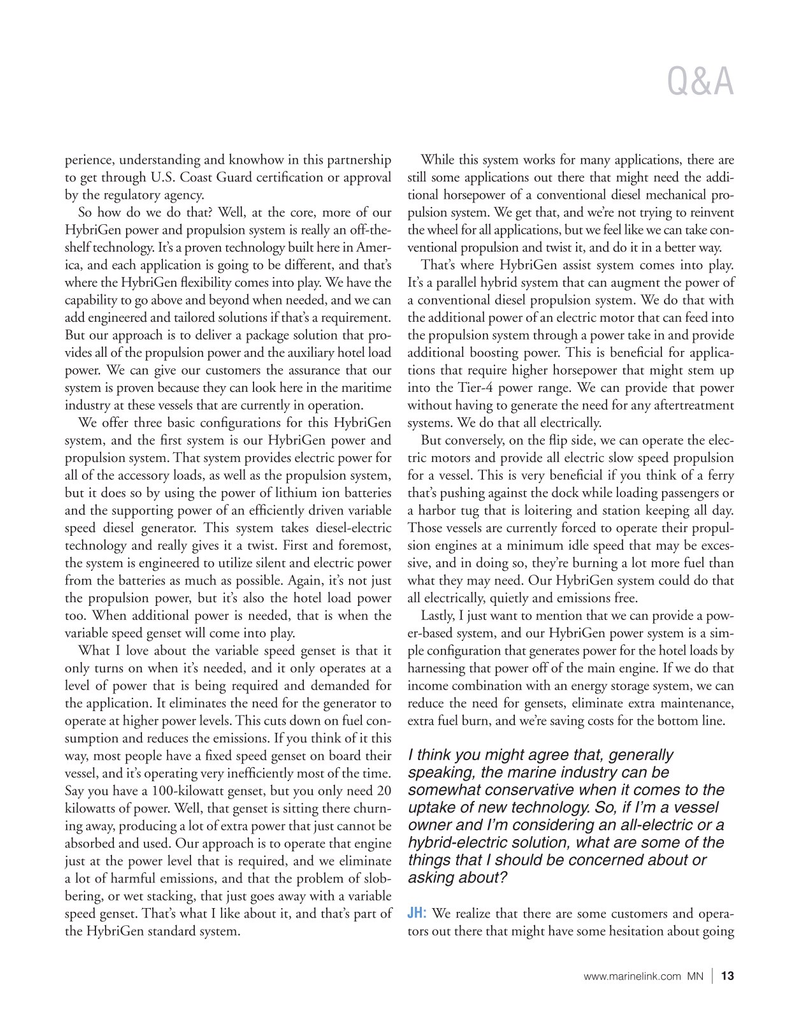 Q&A perience, understanding and knowhow in this partnership While this system works for many applications, there are to get through U.S. Coast Guard certi? cation or approval still some applications out there that might need the addi- by the regulatory agency. tional horsepower of a conventional diesel mechanical pro-

So how do we do that? Well, at the core, more of our pulsion system. We get that, and we’re not trying to reinvent

HybriGen power and propulsion system is really an off-the- the wheel for all applications, but we feel like we can take con- shelf technology. It’s a proven technology built here in Amer- ventional propulsion and twist it, and do it in a better way.

ica, and each application is going to be different, and that’s That’s where HybriGen assist system comes into play. where the HybriGen ? exibility comes into play. We have the It’s a parallel hybrid system that can augment the power of capability to go above and beyond when needed, and we can a conventional diesel propulsion system. We do that with add engineered and tailored solutions if that’s a requirement. the additional power of an electric motor that can feed into

But our approach is to deliver a package solution that pro- the propulsion system through a power take in and provide vides all of the propulsion power and the auxiliary hotel load additional boosting power. This is bene? cial for applica- power. We can give our customers the assurance that our tions that require higher horsepower that might stem up system is proven because they can look here in the maritime into the Tier-4 power range. We can provide that power industry at these vessels that are currently in operation. without having to generate the need for any aftertreatment

We offer three basic con? gurations for this HybriGen systems. We do that all electrically.

system, and the ? rst system is our HybriGen power and But conversely, on the ? ip side, we can operate the elec- propulsion system. That system provides electric power for tric motors and provide all electric slow speed propulsion all of the accessory loads, as well as the propulsion system, for a vessel. This is very bene? cial if you think of a ferry but it does so by using the power of lithium ion batteries that’s pushing against the dock while loading passengers or and the supporting power of an ef? ciently driven variable a harbor tug that is loitering and station keeping all day. speed diesel generator. This system takes diesel-electric Those vessels are currently forced to operate their propul- technology and really gives it a twist. First and foremost, sion engines at a minimum idle speed that may be exces- the system is engineered to utilize silent and electric power sive, and in doing so, they’re burning a lot more fuel than from the batteries as much as possible. Again, it’s not just what they may need. Our HybriGen system could do that the propulsion power, but it’s also the hotel load power all electrically, quietly and emissions free.

too. When additional power is needed, that is when the Lastly, I just want to mention that we can provide a pow- variable speed genset will come into play. er-based system, and our HybriGen power system is a sim-

What I love about the variable speed genset is that it ple con? guration that generates power for the hotel loads by only turns on when it’s needed, and it only operates at a harnessing that power off of the main engine. If we do that level of power that is being required and demanded for income combination with an energy storage system, we can the application. It eliminates the need for the generator to reduce the need for gensets, eliminate extra maintenance, operate at higher power levels. This cuts down on fuel con- extra fuel burn, and we’re saving costs for the bottom line.

sumption and reduces the emissions. If you think of it this way, most people have a ? xed speed genset on board their

I think you might agree that, generally vessel, and it’s operating very inef? ciently most of the time. speaking, the marine industry can be

Say you have a 100-kilowatt genset, but you only need 20 somewhat conservative when it comes to the kilowatts of power. Well, that genset is sitting there churn- uptake of new technology. So, if I’m a vessel ing away, producing a lot of extra power that just cannot be owner and I’m considering an all-electric or a absorbed and used. Our approach is to operate that engine hybrid-electric solution, what are some of the just at the power level that is required, and we eliminate things that I should be concerned about or a lot of harmful emissions, and that the problem of slob- asking about?

bering, or wet stacking, that just goes away with a variable speed genset. That’s what I like about it, and that’s part of JH: We realize that there are some customers and opera- the HybriGen standard system. tors out there that might have some hesitation about going www.marinelink.com MN 13|